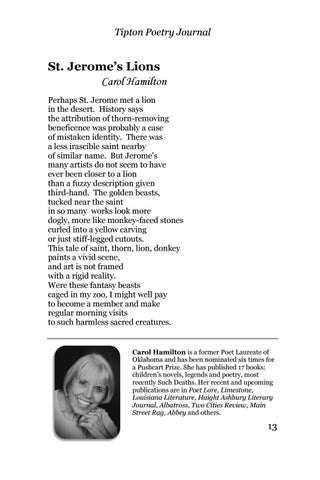 St. Jeromeâ&#x20AC;&#x2122;s Lions Carol Hamilton Perhaps St. Jerome met a lion in the desert. History says the attribution of thorn-removing beneficence was probably a case of mistaken identity. There was a less irascible saint nearby of similar name. But Jerome's many artists do not seem to have ever been closer to a lion than a fuzzy description given third-hand. The golden beasts, tucked near the saint in so many works look more dogly, more like monkey-faced stones curled into a yellow carving or just stiff-legged cutouts. This tale of saint, thorn, lion, donkey paints a vivid scene, and art is not framed with a rigid reality. Were these fantasy beasts caged in my zoo, I might well pay to become a member and make regular morning visits to such harmless sacred creatures.

Carol Hamilton is a former Poet Laureate of Oklahoma and has been nominated six times for a Pushcart Prize. She has published 17 books: childrenâ&#x20AC;&#x2122;s novels, legends and poetry, most recently Such Deaths. Her recent and upcoming publications are in Poet Lore, Limestone, Louisiana Literature, Haight Ashbury Literary Journal, Albatross, Two Cities Review, Main Street Rag, Abbey and others.