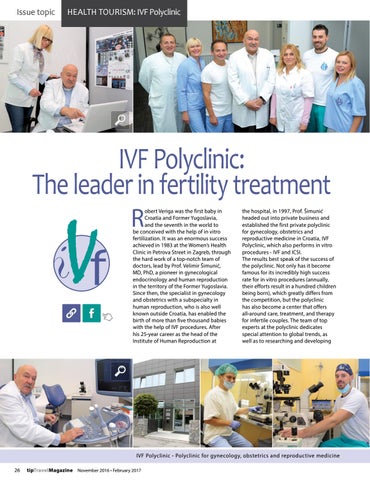 obert Veriga was the first baby in Croatia and Former Yugoslavia, and the seventh in the world to be conceived with the help of in vitro fertilization. It was an enormous success achieved in 1983 at the Women’s Health Clinic in Petrova Street in Zagreb, through the hard work of a top-notch team of doctors, lead by Prof. Velimir Šimunić, MD, PhD, a pioneer in gynecological endocrinology and human reproduction in the territory of the Former Yugoslavia. Since then, the specialist in gynecology and obstetrics with a subspecialty in human reproduction, who is also well known outside Croatia, has enabled the birth of more than five thousand babies with the help of IVF procedures. After his 25-year career as the head of the Institute of Human Reproduction at

the hospital, in 1997, Prof. Šimunić headed out into private business and established the first private polyclinic for gynecology, obstetrics and reproductive medicine in Croatia, IVF Polyclinic, which also performs in vitro procedures - IVF and ICSI. The results best speak of the success of the polyclinic. Not only has it become famous for its incredibly high success rate for in vitro procedures (annually, their efforts result in a hundred children being born), which greatly differs from the competition, but the polyclinic has also become a center that offers all-around care, treatment, and therapy for infertile couples. The team of top experts at the polyclinic dedicates special attention to global trends, as well as to researching and developing 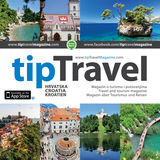