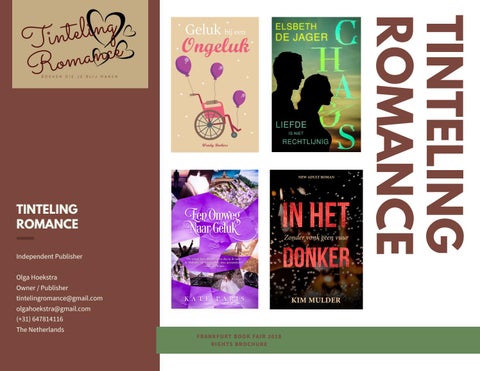 WENDY BROKERS Wendy Brokers is a mother of five and works as a pediatric nurse. She loves to write romance with a twist and has a growing fan base in the Netherlands. ‘The crooked side of love’ is her debut novel and she’s working on a sequel. She gained the love of the Dutch reading audience by posting stories on Facebook and also writes for Dutch publishers Boekerij (romance) and Best of YA (Young Adult).

Philip introduced her as his girlfriend, and

THE CROOKED SIDE OF LOVE BY WENDY BROKERS

he still loves her, wheelchair or not. The only little problem is to convince Susan of his love. Because in her mind, no single

The crooked side of love shows the struggles, victories and insecurities of a young, capable woman, who just happens to be in a wheelchair. Susan Vaughan is young, beautiful and successful. Her past has made her ambitious and driven, but also cynical and with a deep distrust of other people. Every suspense novel she writes hits the bestseller list. Men swarm around her like bees to honey. Just one careless moment on a slippery road: that’s all it takes for her to end up as a paraplegic in a wheelchair. The life she so carefully crafted for herself is over.

Jake Reynolds is a physiotherapist; he specializes in patients with a paraplegia. He’s the one caretaker that isn’t put off by Susan’s antics. Jake seems a happy optimist, not easily scared away. He’s goodlooking, funny, smart and loving… And apparently Susan’s own personal trainer from hell. Jake has his personal reasons for working with Susan, and they’re far from noble. He loved her from the moment his brother

healthy man in his right mind would want a relationship with a disabled woman. But slowly, she comes around and faces her own feelings of lust and love for the handsome new man in her life. Where intimacy and sex never were a problem in the past for the unrestrained Susan, being paralyzed from the waist down makes everything different. For her. For Jake. But slowly she puts aside her fears and embarks on an adventurous and sexy-as-hell journey of discovery. And she learns that she feels a lot more than she ever thought capable. Both physically and emotionally.

EXCERPT - The Crooked side of Love “What happened to Philip?” Jake swallowed, his uncertainty captured in that one simple motion. “He crashed his bike. A drunk driver ran him off the road. Philip died thirty-six hours later. We already knew he had a high paraplegia and would never be able to walk again. If he survived. He didn’t.” She felt the blood draining from her face. Jake got up, as if it was unbearable to crouch beside her for one more minute. He walked towards the counter. Not really wanting to know the answer, she asked the question anyway. ‘What has that got to do with me?’ He ran a hand through his haired The fingers of his other hand massaged his neck as his face turned away from her. “Jake?” She rolled towards him and pulled at his arm, willing his attention to land on her, solely on her. “Why me?” He shook off her hand and stared out the kitchen window. “I couldn’t save him.” His voice sounded hoarse. “My big brother. My best friend. I just stood there. Powerless.” His jaw tightened. It made his face look harsh, determined. “Then I read what had happened to you. And I knew I had to...” “Save me,” she finished the sentence for him, heard the sharpness in her voice, didn’t care. “Whether I wanted to be saved or not.” PRAISE FOR THE CROOKED SIDE OF LOVE ‘Reminded me of Me before you / Jojo Moyes’ - 4* review on Goodreads ‘Beautiful debut novel that handles a heavy subject, but with humor’ - reader’s review on Hebban.nl (biggest Dutch review site)

KATE PARIS Kate Paris is a Dutch national living in Germany. She’s a mother of three and started writing ‘An undertone of love’ whilst living in Norway. Her stories are eloquent and beautifully written, with just the right amount of heartbreak and sorrow. She’s currently working on the third and final installment of the Sommelier Series (fall 2019) and a stand-alone novel about the Northern Lights (spring 2019), both to be published by Tinteling Romance. Photo: (c) Fluitekruidje.nl

A DETOUR TO LOVE BY KATE PARIS (SOMMELIER SERIES #2)

AN UNDERTONE OF LOVE (SOMMELIER #1) The day Ivy Jansen was supposed to make her big dreams come true was the day she lost everything. Her dream of working as a master wine taster. Olivier, the love of her life. Her self-esteem. A shell of her former self, she escapes Aspen and flees to Rotterdam, to the nightclub owned by her childhood friend Bernd. Soon her colleagues find out her special gift for wine-tasting and she gets caught in playing the game ‘Kiss of the Bottle’. Ivy catches the eye of Alexander Ford, manager of the exclusive Ford Hotel chain, and in desperate need for a new master wine taster in his restaurant. He offers Ivy the job. Soon Ivy finds herself enthralled, not only

by her work in Ford’s restaurant, but also by

Philipe in present day and reveals the sad history of urban free climber Fee in retrospect.

the man himself, who seems to give her

Olivier Philipe has got it all. He works as a

in common with than he likes to admit. Fee

master wine taster in the renowned

and Olivier embark on an adventurous road

restaurant of his parents in a small French

trip through Europe and discover that it

town. Men want to be him, women want to

takes some detours before you can truly

do him. But then a message from the one

learn to love again. Not only the person who

person missing in his life turns his whole

seems so different, but also the person who

turns out to be exactly the same as you are

Everything he ever believed in has been a lie

and in an instant, he stands to lose it all: his

A detour to love is a story about falling:

home, his family and his beloved

from grace, for the wrong person, but most

restaurant. In that same moment, he meets

Fee, the runaway bride, whom he has more

everything she so desperately needs. But then an echo from Ivy’s past reappears and sets in motion a series of events that threaten to have Ivy relive her terrible past..

EXCERPT - A Detour to Love

PRAISE FOR AN UNDERCURRENT OF LOVE

Madame Levie’s still looking at me with murder in her eyes when I push myself between two stools and raise my hand. "Mister Philipe?" she asks, her tone full up promises of the pain and suffering she’ll inflict on me in my near future. "Fee wants another glass of wine," I say, suppressing the urge to run. "And you probably would like something with a little ice in it? For that eye of yours? It’s turning pretty black already." The cynicism drips from her voice, normally so full of love and sympathy. A few guests turn their heads in our direction, not even trying to hide their curiosity. She doesn’t wait for my answer, but puts a glass in front of me and pours a copious amount of the Laguna Doc, a wine Ivy would most definitely approve of. If she were here… But she’s not. That’s it. Ivy must be the reason Fee knows Madame Levie and Luc. They had to have been here together. "You are the last person I ever expected to set foot in my bar again, Mister Philipe. Be thankful the girl put in a good word for you. It has me thinking that there might be a little good left in you, after all. Although, Lulu sure doesn’t think the same, despite that little dance of you two in the kitchen, earlier." She moves aside and pushes the kitchen door open with her elbow. The kitchen is clean. And empty. Luc left, without giving me an answer. "You’ve got to be kidding me!" "Seems clear to me," she says and lets the door fall shut. "You’re not the center of the universe here, anymore, Mister Philipe." Then her gaze lands on Fee, who’s still looking out of the window. "I would take good care of this one. She’ll be the only left who will want to have anything to do with you."

‘Unputdownable, that’s why the book deserves my five stars’ - reader’s review on Hebban.nl (biggest Dutch review site) ‘An undertone of love is a romance sensation which one experiences as a good glass of wine, with an undercurrent of different emotions’ - 5* Goodreads Review

ELSBETH DE JAGER Elsbeth de Jager earned her stripes as a children's book author. Her children’s books have been translated to German, English, Spanish, French and Arabic. Elsbeth is a renowned translator (Dutch to German and German to Dutch) and lives with her husband near Utrecht. She travels a lot and invests a lot of her time into volunteer work.

life as best as she can, but finds it hard to

to figure out her life. She has a hard time

trusting men, except Marius, the guy she

about her ex, Rutger, and every bit of truth

met on the island of Texel and hit it off with,

has her heart breaking all over again. Just

right away. But Marius isn’t the kind of guy

when things seem at their worst, Marius

who wants to settle down. He suffered his

own hardships and wants to be free. At

his life again, with Lara. But now it’s Lara

least, for now. He shares one valuable

who has to make a choice, and it’s a difficult

Part of a series (stand alone to read). Sequal

advice with Lara: find the current in your

one: Trying to stay afloat or let the current

life. Back home, Lara tries to rebuild her

KIM MULDER Kim Mulder is a Dutch author. She wrote short stories (Hoedster - Young Adult) and lives with her husband and baby in the north of the Netherlands. In the Dark is her debut novel and first installment in a three book series. The series centers around new adult characters and handles mature topics such as violence and addiction.

and more attracted to her new friend. But

up with deep trust issues, 20-year-old Eva is

Leroy has secrets of his own. He knows how

ready to face life again. On her own terms.

it feels to start over again; he did so himself

Determined not to stay a victim, she moves

after getting clean and trying to leave a life

into her own apartment, away from her

of partying and drugs behind him. As Eva

loving, but controlling mother. On the day

and Leroy’s relationship grows from

she moves into her apartment, she meets

friendship to love, the true question

her new neighbor Leroy when she

remains: are they strong enough to leave

the past behind and not get caught up in

on his head. It’s the start of a tentative

the lies they have lived with for so long?

friendship, in which Eva finds herself more

All rights available outside the Netherlands. For information please contact Olga Hoekstra (c)TintelingRomance 2018 Our books by Dutch talent.

Our books by Dutch talent.