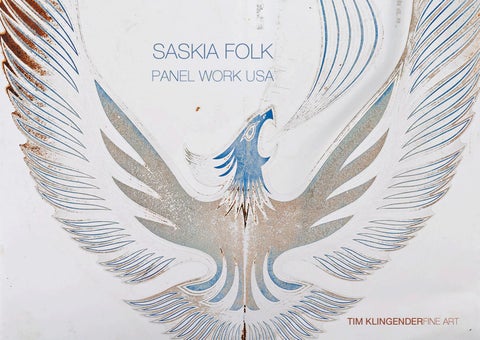 PANEL WORK USA An exhibition of artworks sourced from the wrecking yards of America by Saskia Folk. I spent three months travelling the United States in search of old cars to cut up. My art practice sees me wielding an angle grinder to cut out pieces of metal of various sizes, which I then clean and frame as they are found. I am drawn to the scratches, dents, bullet holes, rust, faded colours and general weathering of automobiles left out in the elements for extended periods of time. The panels I select often reference the landscape, are abstract, or graphic and are framed in white box frames to take the panel away from its source to be viewed in a new context. This new body of work took me away from the central desert of Australia and into new territory. The USA was of particular interest to m e b ecause of the cars that were built there. I knew that the iconic cars of the 1950s, 60s and 70s I had seen in movies would now be wasting away, left to deteriorate, and I wanted to show them in a new light before they were gone forever. Australians are very familiar with these vehicles through movies, popular culture and Matchbox cars, even though they never appeared here… we have a connection… I found beaten up cop cars, a Trans-am bonnet with fading ‘Firebird’ , a pink dem olitio n derby car that had seen better days and many more treasures. For this exhibition I drove all over California, Arizona, New Mexico and Texas in an old yellow school bus in search of panels. I was surprised to find fewer cars left in the landscape than I had encountered in the deserts of Australia. I found one of the biggest car yards in America in Fresno California. Est ab lished in 1927, t he site co ntai ns ov er 70 acres of car bodies spanning a range of periods and styles, all with pronounced personalities. E x a m p l e s o f automotive history including relics from the golden age of car culture were all he r e in one place in various states of decay. T he y ard s old part s to people from all over the world seeking to restore vintage cars and only allowed me to take panels that were unable to be sold due to their condition. Even though that limited my choice, it enabled me to help preserve the availability of these now rare vehicles. In Phoenix Arizona I found another huge yard but was unable to remove panels because of public liability, something I encountered numerous times. In Taos, New Mexico I stumbled across a private yard, a place high in the mountains dappled with snow with an array of vehicles from diﬀerent eras up to the present. As was often the case, I found one or two panels and continued to explore. The end result is a show of 30 panels. Driving the vast and varied landscape across only a small portion of the United States, I was constantly in awe. I was joined by cameraman, Nick Batty, who documented the journey, the yards and the cutting-up of panels. A video work accompanies Panel Work USA. This is my sixth Australian exhibition of car panels and the first where the artworks were sourced outside Australia. This M elbo urne exhib iti on w ill b e the first time these new works are shown in Australia. Another exhibition is planned with Tim Klingender Fine Art at Sydney Contemporary in 2017.

An exhibition of artworks sourced from the wrecking yards of America by Saskia Folk.