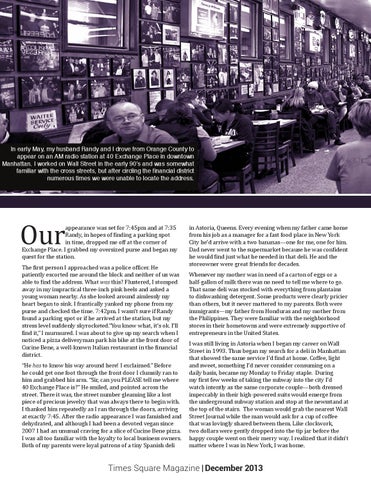 In early May, my husband Randy and I drove from Orange County to appear on an AM radio station at 40 Exchange Place in downtown Manhattan. I worked on Wall Street in the early 90’s and was somewhat familiar with the cross streets, but after circling the financial district numerous times we were unable to locate the address.

appearance was set for 7:45pm and at 7:35 Randy, in hopes of finding a parking spot in time, dropped me off at the corner of Exchange Place. I grabbed my oversized purse and began my quest for the station.

The first person I approached was a police officer. He patiently escorted me around the block and neither of us was able to find the address. What was this? Flustered, I stomped away in my impractical three-inch pink heels and asked a young woman nearby. As she looked around aimlessly my heart began to sink. I frantically yanked my phone from my purse and checked the time. 7:42pm. I wasn’t sure if Randy found a parking spot or if he arrived at the station, but my stress level suddenly skyrocketed.“You know what, it’s ok. I’ll find it,” I murmured. I was about to give up my search when I noticed a pizza deliveryman park his bike at the front door of Cucine Bene, a well-known Italian restaurant in the financial district.

“He has to know his way around here! I exclaimed.” Before he could get one foot through the front door I clumsily ran to him and grabbed his arm. “Sir, can you PLEASE tell me where 40 Exchange Place is?” He smiled, and pointed across the street. There it was, the street number gleaming like a lost piece of precious jewelry that was always there to begin with. I thanked him repeatedly as I ran through the doors, arriving at exactly 7:45. After the radio appearance I was famished and dehydrated, and although I had been a devoted vegan since 2007 I had an unusual craving for a slice of Cucine Bene pizza. I was all too familiar with the loyalty to local business owners. Both of my parents were loyal patrons of a tiny Spanish deli

in Astoria, Queens. Every evening when my father came home from his job as a manager for a fast food place in New York City he’d arrive with a two bananas—one for me, one for him. Dad never went to the supermarket because he was confident he would find just what he needed in that deli. He and the storeowner were great friends for decades. Whenever my mother was in need of a carton of eggs or a half-gallon of milk there was no need to tell me where to go. That same deli was stocked with everything from plantains to dishwashing detergent. Some products were clearly pricier than others, but it never mattered to my parents. Both were immigrants—my father from Honduras and my mother from the Philippines. They were familiar with the neighborhood stores in their hometowns and were extremely supportive of entrepreneurs in the United States.

I was still living in Astoria when I began my career on Wall Street in 1993. Thus began my search for a deli in Manhattan that showed the same service I’d find at home. Coffee, light and sweet, something I’d never consider consuming on a daily basis, became my Monday to Friday staple. During my first few weeks of taking the subway into the city I’d watch intently as the same corporate couple—both dressed impeccably in their high-powered suits would emerge from the underground subway station and stop at the newsstand at the top of the stairs. The woman would grab the nearest Wall Street Journal while the man would ask for a cup of coffee that was lovingly shared between them. Like clockwork, two dollars were gently dropped into the tip jar before the happy couple went on their merry way. I realized that it didn’t matter where I was in New York, I was home. 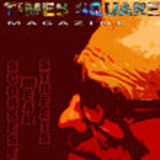