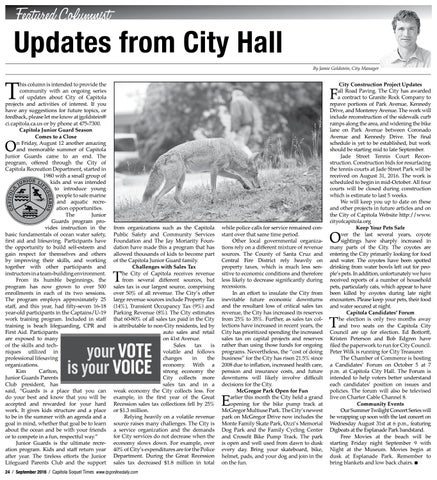 City Construction Project Updates all Road Paving. The City has awarded a contract to Granite Rock Company to

have any suggestions for future topics, or

Drive, and Monterey Avenue. The work will include reconstruction of the sidewalk curb ramps along the area, and widening the bike lane on Park Avenue between Coronado

Capitola Recreation Department, started in 1980 with a small group of kids and was intended to introduce young people to safe marine and aquatic recreation opportunities. The Junior Guards program provides instruction in the basic fundamentals of ocean water safety, the opportunity to build self-esteem and gain respect for themselves and others by improving their skills, and working together with other participants and instructors in a team-building environment. From its humble beginnings, the program has now grown to over 500 enrollments in each of its two sessions.

from organizations such as the Capitola Public Safety and Community Services Foundation and The Jay Moriarity Foundation have made this a program that has allowed thousands of kids to become part of the Capitola Junior Guard family. Challenges with Sales Tax he City of Capitola receives revenue

while police calls for service remained constant over that same time period. Other local governmental organizasources. The County of Santa Cruz and Central Fire District rely heavily on sitive to economic conditions and therefore recessions.

over 50% of all revenue. The City’s other inevitable future economic downturns Parking Revenue (8%). The City estimates

training is beach lifeguarding, CPR and First Aid. Participants of the skills and techniques utilized in professional lifesaving organizations. Junior Guards Parents Club president, has said, “Guards is a place that you can do your best and know that you will be accepted and rewarded for your hard to be in the summer with an agenda and a goal in mind, whether that goal be to learn about the ocean and be with your friends or to compete in a fun, respectful way.” Junior Guards is the ultimate recre-

Relying heavily on a volatile revenue source raises many challenges. The City is a service organization and the demands for City services do not decrease when the

revenue, the City has increased its reserves lections have increased in recent years, the City has prioritized spending the increased rather than using those funds for ongoing programs. Nevertheless, the “cost of doing business” for the City has risen 21.5% since pension and insurance costs, and future decisions for the City. McGregor Park Open for Fun arlier this month the City held a grand opening for the bike pump track at McGregor Multiuse Park. The City’s newest park on McGregor Drive now includes the Monte Family Skate Park, Ozzi’s Memorial Dog Park and the Family Cycling Center is open and well used from dawn to dusk every day. Bring your skateboard, bike, helmet, pads, and your dog and join in the on the fun.

schedule is yet to be established, but work should be starting mid to late September. Jade Street Tennis Court Reconstruction. Construction bids for resurfacing the tennis courts at Jade Street Park will be received on August 31, 2016. The work is scheduled to begin in mid-October. All four courts will be closed during construction which is estimate to last 5 weeks. We will keep you up to date on these and other projects in future articles and on the City of Capitola Website http://www. cityofcapitola.org Keep Your Pets Safe ver the last several years, coyote sightings have sharply increased in many parts of the City. The coyotes are entering the City primarily looking for food and water. The coyotes have been spotted drinking from water bowls left out for peo-

received reports of a number of household pets, particularly cats, which appear to have been killed by coyotes during late night encounters. Please keep your pets, their food and water secured at night. Capitola Candidates’ Forum he election is only two months away and two seats on the Capitola City

Peter Wilk is running for City Treasurer. The Chamber of Commerce is hosting p.m. at Capitola City Hall. The Forum is intended to help voters better understand each candidates’ position on issues and policies. The forum will also be televised live on Charter Cable Channel 8. Community Events Our Summer Twilight Concert Series will be wrapping up soon with the last concert on Wednesday August 31st at 6 p.m., featuring Free Movies at the beach will be starting Friday night September 9 with Night at the Museum. Movies begin at bring blankets and low back chairs.

Serving Our Community for Over 25 Years 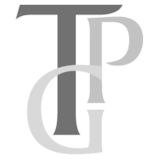