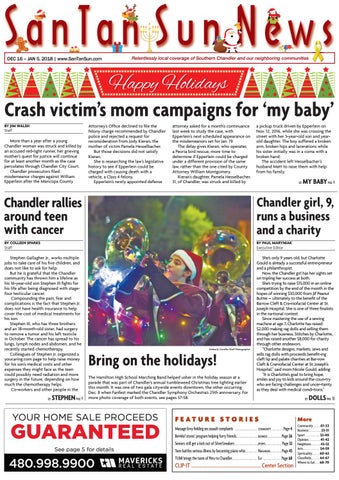 More than a year after a young Chandler woman was struck and killed by an accused red-light runner, her grieving mother’s quest for justice will continue for at least another month as the case percolates through Chandler City Court. Chandler prosecutors filed misdemeanor charges against William Epperlein after the Maricopa County

Attorney’s Office declined to file the felony charge recommended by Chandler police and rejected a request for reconsideration from Jody Kieran, the mother of victim Pamela Hesselbacher. But those decisions did not satisfy Kieran. She is researching the law’s legislative history to see if Epperlein could be charged with causing death with a vehicle, a Class 4 felony. Epperlein’s newly appointed defense

attorney asked for a month’s continuance last week to study the case, with Epperlein’s next scheduled appearance on the misdemeanors set for Jan. 19. The delay gives Kieran, who operates a Peoria bird rescue, more time to determine if Epperlein could be charged under a different provision of the same law, rather than the one cited by County Attorney William Montgomery. Kieran’s daughter, Pamela Hesselbacher, 31, of Chandler, was struck and killed by

a pickup truck driven by Epperlein on Nov. 12, 2016, while she was crossing the street with her 3-year-old son and yearold daughter. The boy suffered a broken arm, broken hips and lacerations while his sister initially was in a coma with a broken hand. The accident left Hesselbacher’s husband Matt to raise them with help from his family. see

Chandler rallies around teen with cancer

Chandler girl, 9, runs a business and a charity

Stephen Gallagher Jr., works multiple jobs to take care of his five children, and does not like to ask for help. But he is grateful that the Chandler community has thrown him a lifeline as his 16-year-old son Stephen III fights for his life after being diagnosed with stagefour testicular cancer. Compounding the pain, fear and complications is the fact that Stephen Jr. does not have health insurance to help cover the cost of medical treatments for his son. Stephen III, who has three brothers and an 18-month-old sister, had surgery to remove a tumor and his left testicle in October. The cancer has spread to his lungs, lymph nodes and abdomen, and he recently started chemotherapy. Colleagues of Stephen Jr. organized a youcaring.com page to help raise money for his son’s medical costs and other expenses they might face as the teen could possibly need radiation and more surgery in the future, depending on how much the chemotherapy helps. Co-workers and other people in the

She’s only 9 years old, but Charlotte Gould is already a successful entre-preneur and a philanthropist. Now, the Chandler girl has her sights set on tripling her success at both. She’s trying to raise $15,000 in an online competition by the end of the month in the hopes of winning $30,000 from Jif Peanut Butter – ultimately to the benefit of the Barrow Cleft & Cra-niofacial Center at St. Joseph Hospital. She is one of three finalists in the na-tional contest. Since mastering the use of a sewing machine at age 7, Charlotte has raised $2,000 making rag dolls and selling them through her business, Stitches by Charlotte, and has raised another $8,000 for charity through other endeavors. “Charlotte designs, markets, sews and sells rag dolls with proceeds benefit-ing cleft lip and palate charities at Bar-row Cleft & Craniofacial Center at St. Joseph’s Hospital,” said mom Nicole Gould, adding: “It is Charlotte’s goal to bring hope, smiles and joy to kids around the coun-try who are facing challenges and uncer-tainty as they deal with medical condi-tions.”

Bring on the holidays!

The Hamilton High School Marching Band helped usher in the holiday season at a parade that was part of Chandler’s annual tumbleweed Christmas tree lighting earlier this month. It was one of two gala citywide events downtown, the other occurring Dec. 8 when Fanfest marked the Chandler Symphony Orchestra’s 25th anniversary. For more photo coverage of both events, see pages 57-58.