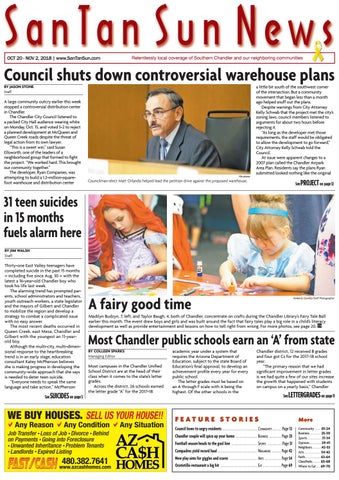 A large community outcry earlier this week stopped a controversial distribution center in Chandler. The Chandler City Council listened to a packed City Hall audience wearing white on Monday, Oct. 15, and voted 5-2 to reject a planned development at McQueen and Queen Creek roads despite the threat of legal action from its own lawyer. “This is a sweet win,” said Susan Ellsworth, one of the leaders of a neighborhood group that formed to fight the project. “We worked hard. This brought our community together.” The developer, Ryan Companies, was attempting to build a 1.2-million-squarefoot warehouse and distribution center

a little bit south of the southwest corner of the intersection. But a community movement that began less than a month ago helped snuff out the plans. Despite warnings from City Attorney Kelly Schwab that the project met the city’s zoning laws, council members listened to arguments for about two hours before rejecting it. “As long as the developer met those requirements, the staff would be obligated to allow the development to go forward,” City Attorney Kelly Schwab told the Council. At issue were apparent changes to a 2007 plan called the Chandler Airpark Area Plan. Residents say the plans Ryan submitted looked nothing like the original

Thirty-one East Valley teenagers have completed suicide in the past 15 months – including five since Aug. 30 – with the latest a 16-year-old Chandler boy who took his life last week. The alarming trend has prompted parents, school administrators and teachers, youth outreach workers, a state legislator and the mayors of Gilbert and Chandler to mobilize the region and develop a strategy to combat a complicated issue with no easy answer. The most recent deaths occurred in Queen Creek, east Mesa, Chandler and Gilbert with the youngest an 11-yearold boy. Although the multi-city, multi-dimensional response to the heartbreaking trend is in an early stage, education consultant Katey McPherson believes she is making progress in developing the community-wide approach that she says is needed to deter teen suicide. “Everyone needs to speak the same language and take action,’’ McPherson See

Madilyn Budzyn, 7, left, and Taylor Baugh, 4, both of Chandler, concentrate on crafts during the Chandler Library’s Fairy Tale Ball earlier this month. The event drew boys and girls and was built around the fact that fairy tales play a big role in a child’s literacy development as well as provide entertainment and lessons on how to tell right from wrong. For more photos, see page 20.

Most campuses in the Chandler Unified School District are at the head of their class when it comes to the state’s letter grades. Across the district, 26 schools earned the letter grade “A” for the 2017-18

academic year under a system that requires the Arizona Department of Education, subject to the state Board of Education’s final approval, to develop an achievement profile every year for every public school. The letter grades must be based on an A through F scale with A being the highest. Of the other schools in the

Chandler district, 12 received B grades and four got Cs for the 2017-18 school year. “The primary reason that we had significant improvement in letter grades is we had quite a few of our sites increase the growth that happened with students on campus on a yearly basis,” Chandler See