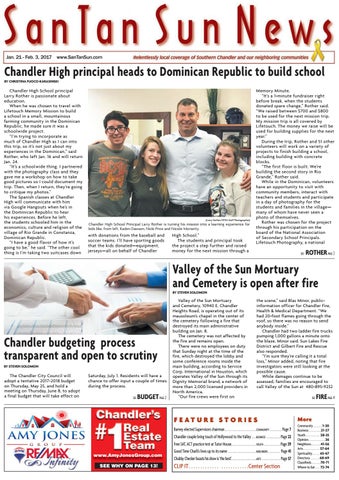 Chandler High School principal Larry Rother is passionate about education. When he was chosen to travel with Lifetouch Memory Mission to build a school in a small, mountainous farming community in the Dominican Republic, he made sure it was a schoolwide project. “I’m trying to incorporate as much of Chandler High as I can into this trip, so it’s not just about my experiences in the Dominican,” said Rother, who left Jan. 16 and will return Jan. 24. “It’s a schoolwide thing. I partnered with the photography class and they gave me a workshop on how to take good pictures so I could document my trip. Then, when I return, they’re going to critique my photos.” The Spanish classes at Chandler High will communicate with him via Google Hangouts when he’s in the Dominican Republic to hear his experiences. Before he left, the students schooled him in the economics, culture and religion of the village of Rio Grande in Constanza, Dominican Republic. “I have a good flavor of how it’s going to be,” he said. “The other cool thing is I’m taking two suitcases down

Chandler High School Principal Larry Rother is turning his mission into a learning experience for kids like, from left, Kaden Dawson, Nicki Price and Nicole Moriarity.

with donations from the baseball and soccer teams. I’ll have sporting goods that the kids donated—equipment, jerseys—all on behalf of Chandler

High School.” The students and principal took the project a step further and raised money for the next mission through a

Memory Minute. “It’s a 1-minute fundraiser right before break, when the students donated spare change,” Rother said. “We raised between $700 and $800 to be used for the next mission trip. My mission trip is all covered by Lifetouch. The money we raise will be used for building supplies for the next year.” During the trip, Rother and 51 other volunteers will work on a variety of projects to finish building a school, including building with concrete blocks. “The first floor is built. We’re building the second story in Rio Grande,” Rother said. While in the Dominican, volunteers have an opportunity to visit with community members, interact with teachers and students and participate in a day of photography for the students and families in the village— many of whom have never seen a photo of themselves. Rother was chosen for the project through his participation on the board of the National Association of Secondary School Principals. Lifetouch Photography, a national see

The Chandler City Council will adopt a tentative 2017-2018 budget on Thursday, May 25, and hold a meeting on Thursday, June 8, to adopt a final budget that will take effect on

Saturday, July 1. Residents will have a chance to offer input a couple of times during the process. see

www.AmyJonesGroup.com SEE WHY ON PAGE 13!

Valley of the Sun Mortuary and Cemetery, 10940 E. Chandler Heights Road, is operating out of its mausoleum’s chapel in the center of the cemetery following a fire that destroyed its main administrative building on Jan. 8. The cemetery was not affected by the fire and remains open. There were no employees on duty that Sunday night at the time of the fire, which destroyed the lobby and some conference rooms inside the main building, according to Service Corp. International in Houston, which operates Valley of the Sun through its Dignity Memorial brand, a network of more than 2,000 licensed providers in North America. “Our fire crews were first on

the scene,” said Blas Minor, publicinformation officer for Chandler Fire, Health & Medical Department. “We had 20-foot flames going through the roof, so there was no reason to send anybody inside.” Chandler had two ladder fire trucks pumping 1,000 gallons a minute onto the blaze, Minor said. Sun Lakes Fire District and Gilbert Fire and Rescue also responded. “I’m sure they’re calling it a total loss,” Minor added, noting that fire investigators were still looking at the possible cause. While damages continue to be assessed, families are encouraged to call Valley of the Sun at 480-895-9232 see