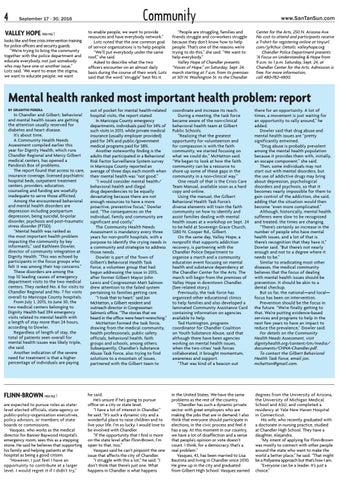 VALLEY HOPE from page 1 looks like and free crisis intervention training for police officers and security guards. “We’re trying to bring the community together with the police department and educate everybody, not just somebody who may have one or another issue,” Lotz said. ‘We want to erase the stigma, we want to educate people, we want

Community to enable people, we want to provide resources and have everybody network.” Lotz noted that the one common goal of service organizations is to help people. “We’ll put everybody under the same roof,” she said. Asked to describe what the two officers encounter on an almost daily basis during the course of their work, Lotz said that the word “struggle” best fits it.

“People are struggling, families and friends struggle and co-workers struggle because they don’t know how to help people. That’s one of the reasons we’re trying to do this,” she said. “We want to help everybody.” Valley Hope of Chandler presents “Voices of Hope,” on Saturday, Sept. 24, march starting at 7 a.m. from its premises at 501 N. Washington St. to the Chandler

www.SanTanSun.com Center for the Arts, 250 N. Arizona Ave. No cost to attend and participants receive a T-shirt for registering online at tinyurl. com/jy9chur. Details: valleyhope.org Chandler Police Department presents “A Focus on Understanding &amp; Hope from 9 a.m. to 1 p.m. Saturday, Sept. 24, at Chandler Center for the Arts. Admission is free. For more information, call 480-782-4800.

In Chandler and Gilbert, behavioral and mental health issues are getting the attention usually reserved for diabetes and heart disease. It’s about time. A Community Health Needs Assessment compiled earlier this year for Dignity Health, which runs Chandler Regional and Mercy Gilbert medical centers, has opened a Pandora’s Box of problems. The report found that access to care, insurance coverage, licensed psychiatric hospital beds, outpatient treatment centers, providers, education, counseling and funding are woefully inadequate to serve those afflicted. Among the encountered behavioral and mental health disorders are depression including postpartum depression, being suicidal, bi-polar disorder, psychosis and post-traumatic stress disorder (PTSD). “Mental health was ranked as the most important health problem impacting the community by key informants,” said Kathleen Dowler, director of community integration at Dignity Health. “This was echoed by participants in the focus groups who felt it was among their top concerns.” These disorders are among the top 10 leading causes of emergency department visits to the two medical centers. They ranked No. 6 for visits to Chandler Regional and No. 7 for visits overall to Maricopa County hospitals. From July 1, 2015, to June 30, the two medical centers belonging to Dignity Health had 394 emergency visits related to mental health with a length of stay more than 24 hours, according to Dowler. Regardless of length of stay, the total of patients seen overall for mental health issues was likely triple, she said. Another indication of the severe need for treatment is that a higher percentage of individuals are paying

FLINN-BROWN from page 1 are expected to pursue roles as statelevel elected officials, state-agency or public-policy-organization executives, policy advisors, or members of state boards or commissions. Vasquez, who works as the medical director for Banner Baywood Hospital’s emergency room, sees this as a stepping stone. He said he believes that supporting his family and helping patients at the hospital as being a good citizen. “However, I just feel I have an opportunity to contribute at a larger level. I would regret it if I didn’t try,”

out of pocket for mental health-related hospital visits, the report stated. In Maricopa County emergency departments, individuals paid for 34% of such visits in 2013, while private medical insurance (usually employer provided) paid for 24% and public/government medical programs paid for 38%. Another noteworthy finding is the adults that participated in a Behavioral Risk Factor Surveillance System survey in Maricopa County reported an average of three days each month when their mental health was “not good.” “I would consider mental health/ behavioral health and illegal drug dependencies to be equally devastating because there are not enough resources to have a more proactive, preventive focus,” Dowler said. “The consequences on the individual, family and community are significant and costly.” The Community Health Needs Assessment is mandatory every three years for non-profit hospitals, with a purpose to identify the crying needs in a community and strategize to address those needs. Dowler is part of the Town of Gilbert’s Behavioral Health Task Force, a volunteer group that had begun addressing the issue in 2015, after former Gilbert Mayor John Lewis and Congressman Matt Salmon drew attention to the failed system pertaining to families getting care. “I took that to heart,” said Jon McHatton, a Gilbert resident and outreach director in Congressman Salmon’s office. “The stories that we heard in the office were heart-wrenching.” McHatton formed the task force, drawing from the medical community, health professionals, public safety officials, behavioral health, faith groups and schools, among others. Subsequently, Chandler’s Substance Abuse Task Force, also trying to find solutions to a mountain of issues, partnered with the Gilbert team to

he said. He’s unsure if he’s going to pursue office on a city or state level. “I have a lot of interest in Chandler,” he said. “It’s such a dynamic city and a wonderful place to raise children and to live your life. I’m so lucky. I would love to be involved with Chandler. “If the opportunity that I find is more on the state level after Flinn-Brown, I’m open to that, too.” Vasquez said he can’t pinpoint the one issue that affects the city of Chandler. “I struggle with this a lot,” he said. “I don’t think that there’s just one. What happens in Chandler is what happens

coordinate and increase its reach. During a meeting, the task force became aware of the non-clinical behavioral health team at Gilbert Public Schools. “Realizing that the greatest opportunity for volunteerism and for compassion is with the faith community, we started focusing on what we could do,” McHatton said. “We began to look at how the faith community can be a resource to shore up some of these gaps in the community in a non-clinical way.” One result of that is the Crisis Care Team Manual, available soon as a hard copy and online. Using the manual, the Gilbert Behavioral Health Task Force’s diverse elements will train the faith community on how to identify and assist families dealing with mental health issues at a workshop on Sept. 24 to be held at Sovereign Grace Church, 1280 N. Cooper Rd., Gilbert. On the same day, Valley Hope, a nonprofit that supports addiction recovery, is partnering with the Chandler Police Department to organize a march and a community education event focusing on mental health and substance dependency at the Chandler Center for the Arts. The march will begin from the premises of Valley Hope in downtown Chandler. (See related story.) Previously, the task force has organized other educational clinics to help families and also developed a laminated Community Assistance Card containing information on agencies available to help. Ted Huntington, programs coordinator for Chandler Coalition on Youth Substance Abuse, said that although there have been agencies working on mental health issues, when the two cities’ task forces collaborated, it brought momentum, awareness and support. “That was kind of a beacon out

there for an opportunity. A lot of times, a movement is just waiting for an opportunity to rally around,” he added. Dowler said that drug abuse and mental health issues are “pretty significantly entwined. “Drug abuse is probably prevalent among the mental health population because it provides them with, initially, an escape component,” she said. Then, some individuals may not start out with mental disorders, but the use of addictive drugs may bring about depression, psychological disorders and psychosis, so that it becomes nearly impossible for them to gain control of the addiction, she said, adding that the situation would then become “even more complicated.” Although, historically, mental health sufferers were slow to be recognized and treated, the times are changing. “There’s certainly an increase in the number of people who have mental health issues, and a lot of that is there’s recognition that they have it,” Dowler said. “But there’s not nearly enough and not to a degree where it needs to be.” Similar to eradicating most other diseases, the medical community believes that the focus of dealing with mental health issues should be prevention. It should be akin to a dental checkup. But so far, the national—and local— focus has been on intervention. Prevention should be the focus in the future. “We’re finally getting to that. We’re putting evidence-based services and programs to help in the next few years to have an impact to reduce the prevalence,” Dowler said. For details on the Community Health Needs Assessment, visit dignityhealth.org/content/cm/media/ documents/CHNA-Chandler.pdf. To contact the Gilbert Behavioral Health Task Force, email jon. mchatton@gmail.com.

in the United States. We have the same problems as the rest of the country. “Chandler has such a dynamic private sector with great employers who are making the jobs that are in demand. I also think that everyone should participate in elections, in the civic process and feel it has a say. At this moment in our country, we have a lot of disaffection and a sense that people’s opinion or vote doesn’t count. I think, for a democracy, that’s a real problem.” Vasquez, 43, has been married to Lisa Bautista and living in Chandler since 2010. He grew up in the city and graduated from Gilbert High School. Vasquez earned

degrees from the University of Arizona, the University of Michigan Medical School and ASU, and completed a residency at Yale New Haven Hospital in Connecticut. His wife, who recently graduated with a doctorate in nursing practice, studied at Chandler High School. They have a daughter, Alejandra. “My intent of applying for Flinn-Brown was mostly to connect with other people around the state who want to make the world a better place,” he said. “That might be a Pollyanna approach but that’s how I am. “Everyone can be a leader. It’s just a choice.”