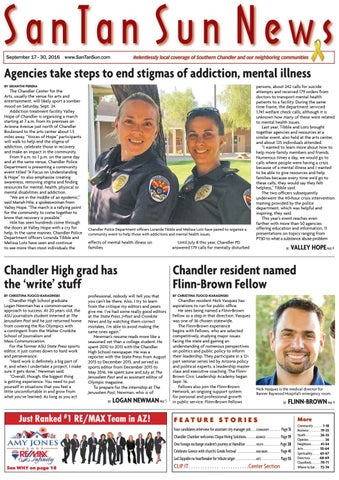 The Chandler Center for the Arts, usually the venue for arts and entertainment, will likely sport a somber mood on Saturday, Sept. 24. Addiction treatment facility Valley Hope of Chandler is organizing a march starting at 7 a.m. from its premises on Arizona Avenue just north of Chandler Boulevard to the arts center about 1.5 miles away. “Voices of Hope” participants will walk to help end the stigma of addiction, celebrate those in recovery and make an impact in the community. From 9 a.m. to 1 p.m. on the same day and at the same venue, Chandler Police Department is presenting a community event titled “A Focus on Understanding & Hope” to also emphasize creating awareness, removing stigma and finding resources for mental, health, physical or mental disabilities and addiction. “We are in the middle of an epidemic,” said Mariah Hile, a spokeswoman from Valley Hope. “The march is a rallying point for the community to come together to know that recovery is possible.” Hile has seen hundreds come through the doors at Valley Hope with a cry for help. In the same manner, Chandler Police Department officers Loranda Tibble and Melissa Lotz have seen and continue to see more than most individuals the

Chandler Police Department officers Loranda Tibble and Melissa Lotz have paired to organize a community event to help those with addictions and mental health issues.

Chandler High grad has the ‘write’ stuff BY CHRISTINA FUOCO-KARASINSKI

Chandler High School graduate Logan Newman has a common-sense approach to success. At 20 years old, the ASU journalism student interned at The Jerusalem Post and he just returned home from covering the Rio Olympics with a contingent from the Walter Cronkite School of Journalism and Mass Communication. For the former ASU State Press sports editor, it just comes down to hard work and perseverance. “Hard work is definitely a big part of it, and when I undertake a project, I make sure it gets done,” Newman said. “Overall, though, the biggest thing is getting experience. You need to put yourself in situations that you feel a little uncomfortable in and grow from what you’ve learned. As long as you act

professional, nobody will tell you that you can’t be there. Also, I try to learn from the critique my editors and peers give me. I’ve had some really good editors at the State Press, J-Post and Cronkite News and by watching them correct mistakes, I’m able to avoid making the same ones again.” Newman’s resume reads more like a seasoned vet than a college student. He spent 2010 to 2013 with the Chandler High School newspaper. He was a reporter with the State Press from August 2013 to December 2015, and served as sports editor from December 2015 to May 2016. He spent June and July at The Jerusalem Post and as assistant editor of Olympic magazine. To prepare for the internship at The Jerusalem Post, Newman, who is of see

Chandler resident Nick Vasquez has aspirations to run for public office. He sees being named a Flinn-Brown Fellow as a step in that direction. Vasquez was one of 36 chosen statewide. The Flinn-Brown experience begins with Fellows, who are selected competitively, studying major issues facing the state and gaining an understanding of numerous perspectives on politics and public policy to inform their leadership. They participate in a 12part seminar series led by Arizona policy and political experts, a leadership master class and executive coaching. The FlinnBrown Civic Leadership Academy began Sept. 16. Fellows also join the Flinn-Brown Network, an ongoing support system for personal and professional growth in public service. Flinn-Brown Fellows

persons, about 242 calls for suicide attempts and received 179 orders from doctors to transport mental health patients to a facility. During the same time frame, the department serviced 1,741 welfare check calls, although it is unknown how many of these were related to mental health issues. Last year, Tibble and Lotz brought together agencies and resources at a similar event, also held at the arts center, and about 125 individuals attended. “I wanted to learn more about how to help more family members and friends. Numerous times a day, we would go to calls where people were having a crisis because of a mental illness and I wanted to be able to give resources and help families because every time we’d go to these calls, they would say they felt helpless,” Tibble said. The two officers subsequently underwent the 40-hour crisis intervention training provided by the police department, which was helpful and inspiring, they said. This year’s event reaches even farther with more than 50 agencies offering education and information, 11 presentations on topics ranging from PTSD to what a substance abuse problem