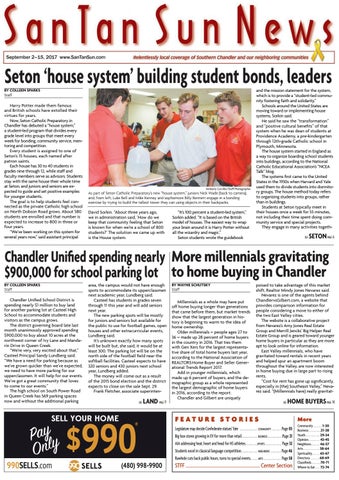 Harry Potter made them famous and British schools have extolled their virtues for years. Now, Seton Catholic Preparatory in Chandler has debuted a “house system,” a student-led program that divides every grade level into groups that meet every week for bonding, community service, mentoring and competition. Every student is assigned to one of Seton’s 15 houses, each named after patron saints. Each house has 30 to 40 students in grades nine through 12, while staff and faculty members serve as advisors. Students stay with the same house their whole time at Seton, and juniors and seniors are expected to guide and set positive examples for younger students. The goal is to help students feel connected as the private Catholic high school on North Dobson Road grows. About 580 students are enrolled and that number is expected to increase to 800 in three or four years. “We’ve been working on this system for several years now,” said assistant principal

As part of Seton Catholic Preparatory’s new “house system,” juniors Nick Wade (back to camera), and, from left, Luke Bell and Mike Kenney and sophomore Billy Bennett engage in a bonding exercise by trying to build the tallest tower they can using objects in their backpacks.

David Sorkin. “About three years ago, we in administration said, ‘How do we keep that community feeling that Seton is known for when we’re a school of 800 students?’ The solution we came up with is the House system.

“It’s 100 percent a student-led system,” Sorkin added. “It is based on the British model of houses. The easiest way to wrap your brain around it is Harry Potter without all the wizardry and magic.” Seton students wrote the guidebook

and the mission statement for the system, which is to provide a “student-led community fostering faith and solidarity.” Schools around the United States are moving toward or implementing house systems, Sorkin said. He said he saw the “transformation” and “positive cultural benefits” of that system when he was dean of students at Providence Academy, a pre-kindergarten through 12th-grade Catholic school in Plymouth, Minnesota. The house system started in England as a way to organize boarding school students into buildings, according to the National Catholic Educational Association’s “NCEA Talk” blog. The systems first came to the United States in the 1930s when Harvard and Yale used them to divide students into dormitory groups. The house method today refers to organizing students into groups, rather than in buildings. Students at Seton typically meet in their houses once a week for 55 minutes, not including their time spent doing community service and special projects. They engage in many activities togethsee

Chandler Unified School District is spending nearly $1 million to buy land for another parking lot at Casteel High School to accommodate students and visitors as the campus grows. The district governing board late last month unanimously approved spending $900,000 to buy about 10 acres at the northwest corner of Ivy Lane and Mandarin Drive in Queen Creek. “We’re very, very excited about that,” Casteel Principal Sandy Lundberg said. “We have a need for parking because as we’ve grown quicker than we’ve expected, we need to have more parking for our upperclassmen. It will help for our events. We’ve got a great community that loves to come to our events.” The high school on South Power Road in Queen Creek has 569 parking spaces now and without the additional parking

area, the campus would not have enough spots to accommodate its upperclassmen next academic year, Lundberg said. Casteel has students in grades seven through 11 this year and will add seniors next year. The new parking spots will be mostly for juniors and seniors but available for the public to use for football games, open houses and other extracurricular events, Lundberg said. It’s unknown exactly how many spots will be built but, she said, it would be at least 300. The parking lot will be on the north side of the football field near the softball facilities. Casteel expects to have 320 seniors and 430 juniors next school year, Lundberg added. The money will come out as a result of the 2015 bond election and the district expects to close on the sale Sept. 29. Frank Fletcher, associate superinten-

Millennials as a whole may have put off home buying longer than generations that came before them, but market trends show that the largest generation in history is beginning to warm to the idea of home ownership. Older millennials – people ages 27 to 36 – made up 28 percent of home buyers in the country in 2016. That ties them with Gen Xers for the largest representative share of total home buyers last year, according to the National Association of REALTORS Home Buyer and Seller Generational Trends Report 2017. Add in younger millennials, which made up 6 percent of buyers, and the demographic group as a whole represented the largest demographic of home buyers in 2016, according to the report. Chandler and Gilbert are uniquely

poised to take advantage of this market shift, Realtor Mindy Jones Nevarez said. Nevarez is one of the agents behind ChandlervsGilbert.com, a website that provides comparison information for people considering a move to either of the two East Valley cities. The website is a collaborative project from Nevarez’s Amy Jones Real Estate Group and Merrill Jencks’ Big Helper Real Estate Group and is geared toward younger home buyers in particular as they are more apt to look online for information. East Valley millennials, who have gravitated toward rentals in recent years and helped spur an apartment boom throughout the Valley, are now interested in home buying due in large part to rising rents. “Cost for rent has gone up significantly, especially in (the) Southeast Valley,” Nevarez said. “(Millennials have) really gravitatsee