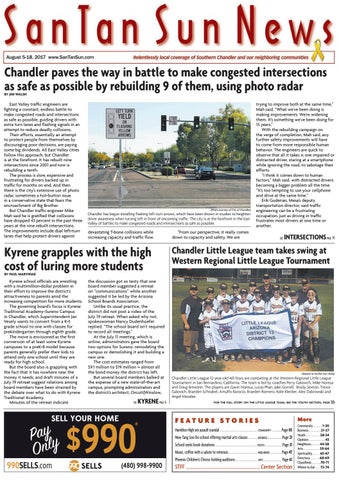 Chandler paves the way in battle to make congested intersections as safe as possible by rebuilding 9 of them, using photo radar BY JIM WALSH

East Valley traffic engineers are fighting a constant, endless battle to make congested roads and intersections as safe as possible, guiding drivers with extra turn lanes and flashing signals in an attempt to reduce deadly collisions. Their efforts, essentially an attempt to protect people from themselves by discouraging poor decisions, are paying some big dividends. All East Valley cities follow this approach, but Chandler is at the forefront. It has rebuilt nine intersections since 2001 and now is rebuilding a tenth. The process is slow, expensive and frustrating for drivers backed up in traffic for months on end. And then there is the city’s extensive use of photo radar, sometimes a hot-button issue in a conservative state that fears the encroachment of Big Brother. But Chandler traffic engineer Mike Mah said he is gratified that collisions have dropped 43 percent in the past three years at the nine rebuilt intersections. The improvements include dual left-turn lanes that help protect drivers against

(Photo courtesy of City of Chandler)

Chandler has begun installing flashing left-turn arrows, which have been shown in studies to heighten driver awareness when turning left in front of oncoming traffic. The city is at the forefront in the East Valley of battles to make congested roads and intersections as safe as possible.

Kyrene grapples with the high cost of luring more students

trying to improve both at the same time,” Mah said. “What we’ve been doing is making improvements. We’re widening them. It’s something we’ve been doing for 15 years.” With the rebuilding campaign on the verge of completion, Mah said, any further safety improvements will have to come from more responsible human behavior. The engineers are quick to observe that all it takes is one impaired or distracted driver, staring at a smartphone while ignoring the road, to sabotage their efforts. “I think it comes down to human factors,” Mah said, with distracted drivers becoming a bigger problem all the time. “It’s too tempting to use your cellphone and drive at the same time.” Erik Guderian, Mesa’s deputy transportation director, said traffic engineering can be a frustrating occupation, just as driving in traffic frustrates most drivers at one time or another.

“From our perspective, it really comes down to capacity and safety. We are

Kyrene school officials are wrestling with a multimillion-dollar problem in their effort to improve the district’s attractiveness to parents amid the increasing competition for more students. The governing board’s focus is Kyrene Traditional Academy-Sureno Campus in Chandler, which Superintendent Jan Vesely wants to convert from a K-5 grade school to one with classes for prekindergarten through eighth grade. The move is envisioned as the first conversion of at least some Kyrene campuses to a preK-8 model because parents generally prefer their kids to attend only one school until they are ready for high school. But the board also is grappling with the fact that it has nowhere near the money it needs, and draft minutes of a July 19 retreat suggest relations among board members have been strained by the debate over what to do with Kyrene Traditional Academy. Minutes of the retreat indicate

the discussion got so testy that one board member suggested a retreat on “communications” while another suggested it be led by the Arizona School Boards Association. Unlike its usual practice, the district did not post a video of the July 19 retreat. When asked why not, spokeswoman Nancy Dudenhoefer replied, “The school board isn’t required to record all meetings.” At the July 11 meeting, which is online, administrators gave the board two options for Sureno: remodeling the campus or demolishing it and building a new one. The cost estimates ranged from $9.1 million to $19 million – almost all the bond money the district has left. But several board members balked at the expense of a new state-of-the-art campus, prompting administrators and the district’s architect, Orcutt|Winslow,