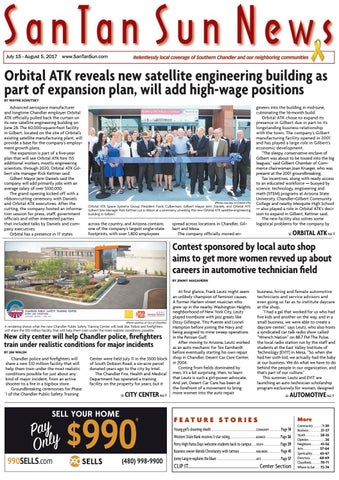 Advanced aerospace manufacturer and longtime Chandler employer Orbital ATK officially pulled back the curtain on its new satellite engineering building on June 28. The 60,000-square-foot facility in Gilbert, located on the site of Orbital’s existing satellite manufacturing plant, will provide a base for the company’s employment growth plans. The expansion is part of a five-year plan that will see Orbital ATK hire 155 additional workers, mostly engineering scientists, through 2020, Orbital ATK Gilbert site manager Rick Kettner said. Gilbert Mayor Jenn Daniels said the company will add primarily jobs with an average salary of over $100,000. The grand opening kicked off with a ribbon-cutting ceremony with Daniels and Orbital ATK executives. After the cutting, the company hosted an information session for press, staff, government officials and other interested parties that included talks by Daniels and company executives. Orbital has a presence in 17 states

across the country, and Arizona contains one of the company’s largest single-state footprints, with over 1,800 employees

spread across locations in Chandler, Gilbert and Mesa. The company officially moved en-

gineers into the building in mid-June, culminating the 16-month build. Orbital ATK chose to expand its presence in Gilbert due in part to its longstanding business relationship with the town. The company’s Gilbert manufacturing facility opened in 2001 and has played a large role in Gilbert’s economic development. “The sleepy, conservative enclave of Gilbert was about to be tossed into the big leagues,” said Gilbert Chamber of Commerce chairwoman Joan Krueger, who was present at the 2001 groundbreaking. Tax incentives, along with ready access to an educated workforce — buoyed by science, technology, engineering and math (STEM) programs at Arizona State University, Chandler-Gilbert Community College and nearby Mesquite High School — also played a role in Orbital ATK’s decision to expand in Gilbert, Kettner said. The new facility also solves some logistical problems for the company by see

(Photo courtesy of City of Chandler)

A rendering shows what the new Chandler Public Safety Training Center will look like. Police and firefighters will share the $10 million facility that will help them train under the most realistic conditions possible.

Chandler police and firefighters will share a new $10 million facility that will help them train under the most realistic conditions possible for just about any kind of major incident, from an active shooter to a fire in a big-box store. Groundbreaking ceremonies for Phase 1 of the Chandler Public Safety Training

Center were held July 11 in the 3500 block of South Dobson Road, a six-acre parcel donated years ago to the city by Intel. The Chandler Fire, Health and Medical Department has operated a training facility on the property for years, but it

At first glance, Frank Leutz might seem an unlikely champion of feminist causes. A former Harlem street musician who grew up in the nearby Washington Heights neighborhood of New York City, Leutz played trombone with jazz greats like Dizzy Gillespie, Tito Puente and Lionel Hampton before joining the Navy and being assigned to mine sweep operations in the Persian Gulf. After moving to Arizona, Leutz worked as an auto mechanic for Tex Earnhardt before eventually starting his own repair shop in Chandler, Desert Car Care Center, in 2004. Coming from fields dominated by men, it’s a bit surprising, then, to learn that Leutz is such a girl-power advocate. And yet, Desert Car Care has been at the forefront of a movement to bring more women into the auto repair

business, hiring and female automotive technicians and service advisors and even going so far as to institute daycare at the shop. “I had a gal that worked for us who had five kids and another on the way, and in a small business, we were able to create a daycare center,” says Leutz, who also hosts a syndicated car talk radio show called “Wrench Nation” on 88.7 FM The Pulse, the local radio station run by the staff and students at the East Valley Institute of Technology (EVIT) in Mesa. “So when she had her sixth kid, we actually had the baby at our business. We do what we have to do behind the people in our organization, and that’s part of our culture.” This summer, Leutz and EVIT are launching an auto technician scholarship program exclusively for women, designed see