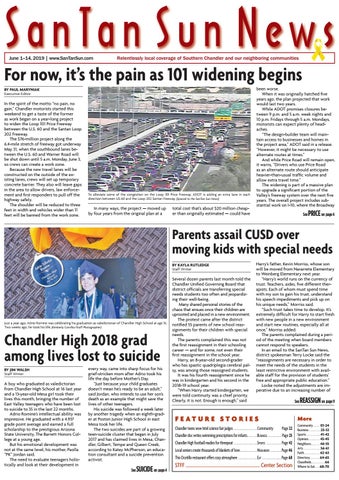 For now, it’s the pain as 101 widening begins BY PAUL MARYNIAK Executive Editor

In the spirit of the motto “no pain, no gain,” Chandler motorists started this weekend to get a taste of the former as work began on a year-long project to widen the Loop 101 Price Freeway between the U.S. 60 and the Santan Loop 202 Freeway. The $76-million project along the 6.4-mile stretch of freeway got underway May 31, when the southbound lanes between the U.S. 60 and Warner Road will be shut down until 5 a.m. Monday, June 3, so crews can create a work zone. Because the new travel lanes will be constructed on the outside of the existing lanes, crews will set up temporary concrete barrier. They also will leave gaps in the area to allow drivers, law enforcement and first responders to pull off the highway safely. The shoulder will be reduced to three feet in width and vehicles wider than 11 feet will be banned from the work zone.

To alleviate some of the congestion on the Loop 101 Price Freeway, ADOT is adding an extra lane in each direction between US 60 and the Loop 202 Santan Freeway. (Special to the SanTan Sun News)

In many ways, the project — moved up by four years from the original plan at a

been worse. When it was originally hatched five years ago, the plan projected that work would last two years. While ADOT promises closures between 9 p.m. and 5 a.m. week nights and 10 p.m. Fridays through 5 a.m. Mondays, motorists can expect plenty of headaches. “The design-builder team will maintain access to businesses and homes in the project area,” ADOT said in a release. “However, it might be necessary to use alternate routes at times.” And while Price Road will remain open, it warns, “Drivers who use Price Road as an alternate route should anticipate heavier-than-usual traffic volume and allow extra travel time.” The widening is part of a massive plan to upgrade a significant portion of the Valley’s freeway system over the next five years. The overall project includes substantial work on I-10, where the Broadway See

Just a year ago, Adrio Romine was celebrating his graduation as valedictorian of Chandler High School at age 16. Two weeks ago, he took his life. (Kimberly Carrillo/Staff Photographer)

A boy who graduated as valedictorian from Chandler High School at 16 last year and a 13-year-old Mesa girl took their lives this month, bringing the number of East Valley teenagers who have been lost to suicide to 35 in the last 22 months. Adrio Romine’s intellectual ability was impressive. He graduated with a 4.937 grade point average and earned a full scholarship to the prestigious Arizona State University, The Barrett Honors College at a young age. But his emotional development was not at the same level, his mother, Paolla “PK” Jordan said. The need to evaluate teenagers holistically and look at their development in

every way, came into sharp focus for his grief-stricken mom after Adrio took his life the day before Mother’s Day. “Just because your child graduates doesn’t mean he’s ready to be an adult,’’ said Jordan, who intends to use her son’s death as an example that might save the lives of other teenagers. His suicide was followed a week later by another tragedy when an eighth-grader at Poston Junior High School in east Mesa took her life. The two suicides are part of a growing teen-suicide cluster that began in July 2017 and has claimed lives in Mesa, Chandler, Gilbert, Tempe and Queen Creek, according to Katey McPherson, an education consultant and a suicide prevention activist. See

Several dozen parents last month told the Chandler Unified Governing Board that district officials are transferring special needs students too often and jeopardizing their well-being. Many shared personal stories of the chaos that ensues once their children are uprooted and placed in a new environment. The protest came after the district notified 55 parents of new school reassignments for their children with special needs. The parents complained this was not the first reassignment in their schooling career — and for some, not even their first reassignment in the school year. Harry, an 8-year-old second-grader who has spastic quadriplegia cerebral palsy, was among those reassigned students. It was his fourth reassignment since he was in kindergarten and his second in the 2018-19 school year. “When Harry started kindergarten, we were told continuity was a chief priority. Clearly, it is not. Enough is enough,” said

Harry’s father, Kevin Morriss, whose son will be moved from Navarrete Elementary to Weinberg Elementary next year. “Harry’s world runs on the currency of trust. Teachers, aides, five different therapists. Each of whom must spend time with my son to gain his trust, understand his speech impediments and pick up on his unique needs,” Morriss said. “Such trust takes time to develop. It’s extremely difficult for Harry to start fresh with new people in a new environment and start new routines, especially all at once,” Morriss added. The parents complained during a period of the meeting when board members cannot respond to speakers. In an email to the SanTan Sun News, district spokesman Terry Locke said the “reassignments are necessary in order to meet the needs of the students in the least restrictive environment with available staff for the provision of students’ free and appropriate public education.” Locke noted the adjustments are imperative due to an increasing number of