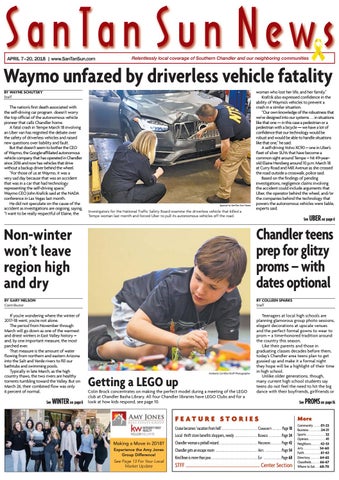 The nation’s first death associated with the self-driving car program doesn’t worry the top official of the autonomous vehicle pioneer that calls Chandler home. A fatal crash in Tempe March 18 involving an Uber van has reignited the debate over the safety of driverless vehicles and raised new questions over liability and fault. But that doesn’t seem to bother the CEO of Waymo, the Google-affiliated autonomous vehicle company that has operated in Chandler since 2016 and now has vehicles that drive without a backup driver behind the wheel. “For those of us at Waymo, it was a very sad day because that was an accident that was in a car that had technology representing the self-driving space,” Waymo CEO John Krafcik said at the NADA conference in Las Vegas last month. He did not speculate on the cause of the accident as investigations are ongoing, saying, “I want to be really respectful of Elaine, the

Investigators for the National Traffi c Safety Board examine the driverless vehicle that killed a Tempe woman last month and forced Uber to pull its autonomous vehicles off the road.

woman who lost her life, and her family.” Krafcik also expressed confidence in the ability of Waymo’s vehicles to prevent a crash in a similar situation. “Our own knowledge of the robustness that we’ve designed into our systems . . . in situations like that one — in this case a pedestrian or a pedestrian with a bicycle — we have a lot of confidence that our technology would be robust and would be able to handle situations like that one,” he said. A self-driving Volvo XC90 – one in Uber’s fleet of silver SUVs that have become a common sight around Tempe – hit 49-yearold Elaine Herzberg around 10 p.m. March 18 at Curry Road and Mill Avenue as she crossed the road outside a crosswalk, police said. Based on the findings of pending investigations, negligence claims involving the accident could include arguments that Uber, the operator behind the wheel, and/or the companies behind the technology that powers the autonomous vehicles were liable, experts said. See

If you’re wondering where the winter of 2017-18 went, you’re not alone. The period from November through March will go down as one of the warmest and driest winters in East Valley history – and, by one important measure, the most parched ever. That measure is the amount of water flowing from northern and eastern Arizona into the Salt and Verde rivers to fill our bathtubs and swimming pools. Typically in late March, as the high country thaws, the two rivers are healthy torrents tumbling toward the Valley. But on March 26, their combined flow was only 6 percent of normal.

Teenagers at local high schools are planning glamorous group photo sessions, elegant decorations at upscale venues and the perfect formal gowns to wear to prom – a time-honored tradition around the country this season. Like their parents and those in graduating classes decades before them, today’s Chandler area teens plan to get gussied up and make it a formal night they hope will be a highlight of their time in high school. Unlike older generations, though, many current high school students say teens do not feel the need to hit the big dance with their boyfriends, girlfriends or

Getting a LEGO up

Colin Brock concentrates on making the perfect model during a meeting of the LEGO club at Chandler Basha Library. All four Chandler libraries have LEGO Clubs and for a look at how kids respond, see page 10.