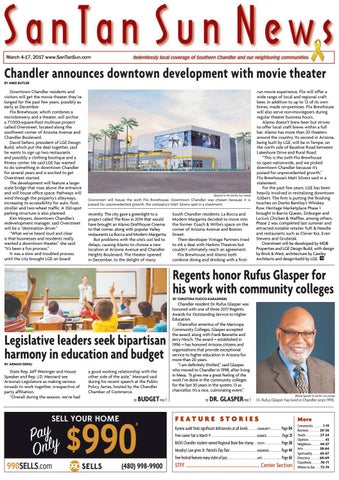 Downtown Chandler residents and visitors will get the movie theater they’ve longed for the past few years, possibly as early as December. Flix Brewhouse, which combines a microbrewery and a theater, will anchor a 77,000-square-foot multiuse project called Overstreet, located along the southwest corner of Arizona Avenue and Chandler Boulevard. David Sellers, president of LGE Design Build, which put the deal together, said he wants to sign up two restaurants and possibly a clothing boutique and a fitness center. He said LGE has wanted to do something in downtown Chandler for several years and is excited to get Overstreet started. The development will feature a largescale bridge that rises above the entrance and will house office space. Pathways will wind through the property’s alleyways, increasing its accessibility for auto, foot, stroller and two-wheel traffic. A 350-spot parking structure is also planned. Kim Moyers, downtown Chandler’s redevelopment manager, said Overstreet will be a “destination driver.” “What we’ve heard loud and clear is that businesses and residents really wanted a downtown theater,” she said. “It’s been a fun process.” It was a slow and troubled process until the city brought LGE on board

(Special to the SanTan Sun News)

Overstreet will house the sixth Flix Brewhouse. Downtown Chandler was chosen because it is poised for unprecedented growth, the company’s Matt Silvers said in a statement.

recently. The city gave a greenlight to a project called The Row in 2014 that would have brought an Alamo Drafthouse Cinema to that corner, along with popular Valley restaurants La Bocca and Modern Margarita. But problems with the site’s soil led to delays, causing Alamo to choose a new location at Arizona Avenue and Chandler Heights Boulevard. The theater opened in December, to the delight of many

South Chandler residents. La Bocca and Modern Margarita decided to move into the former Coach & Willie’s space on the corner of Arizona Avenue and Boston Street. Then-developer Vintage Partners tried to ink a deal with Harkins Theatres but couldn’t ultimately reach an agreement. Flix Brewhouse and Alamo both combine dining and drinking with a first-

run movie experience. Flix will offer a wide range of local and regional craft beer, in addition to up to 12 of its own brews, made on-premises. Flix Brewhouse will also serve non-moviegoers during regular theater business hours. Alamo doesn’t brew beer but strives to offer local craft brews within a full bar. Alamo has more than 20 theaters around the country. Its second in Arizona, being built by LGE, will be in Tempe, on the north side of Baseline Road between Lakeshore Drive and Rural Road. “This is the sixth Flix Brewhouse to open nationwide, and we picked downtown Chandler because it’s poised for unprecedented growth,” Flix Brewhouse’s Matt Silvers said in a statement. For the past few years, LGE has been heavily involved in revitalizing downtown Gilbert. The firm is putting the finishing touches on Dierks Bentley’s Whiskey Row. Heritage Marketplace Phase 1 brought in Barrio Queen, Zinburger and Lo-Lo’s Chicken & Waffles, among others. Phase 2 was completed last summer and attracted notable retailer Tuft & Needle and restaurants such as Clever Koi, Even Stevens and Grubstak. Overstreet will be developed by MDB Properties and LGE Design Build, with design by Brick & West, architecture by Cawley Architects and design-build by LGE.

a good working relationship with the other side of the aisle,” Mesnard said during his recent speech at the Public Policy Series, hosted by the Chandler Chamber of Commerce. see

Chandler resident Dr. Rufus Glasper was honored with one of three 2017 Regents Awards for Outstanding Service to Higher Education. Chancellor emeritus of the Maricopa Community Colleges, Glasper accepted the award, along with Frank Besnette and Jerry Hirsch. The award – established in 1996 – has honored Arizona citizens and organizations that provide exceptional service to higher education in Arizona for more than 20 years. “I am definitely thrilled,” said Glasper, who moved to Chandler in 1998, after living in Mesa. “It gives me a great feeling of the work I’ve done in the community colleges for the last 30 years in the system, 13 as chancellor. It’s a nice, culminating event.” see

Dr. Rufus Glasper has lived in Chandler since 1998.