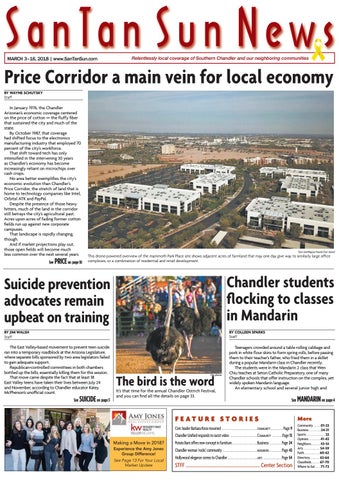 In January 1976, the Chandler Arizonan’s economic coverage centered on the price of cotton — the fluffy fiber that sustained the city and much of the state. By October 1987, that coverage had shifted focus to the electronics manufacturing industry that employed 70 percent of the city’s workforce. That shift toward tech has only intensified in the intervening 30 years as Chandler’s economy has become increasingly reliant on microchips over cash crops. No area better exemplifies the city’s economic evolution than Chandler’s Price Corridor, the stretch of land that is home to technology companies like Intel, Orbital ATK and PayPal. Despite the presence of those heavy hitters, much of the land in the corridor still betrays the city’s agricultural past. Acres upon acres of fading former cotton fields run up against new corporate campuses. That landscape is rapidly changing, though. And if market projections play out, those open fields will become much less common over the next several years See

This drone-powered overview of the mammoth Park Place site shows adjacent acres of farmland that may one day give way to similarly large offi ce complexes, or a combination of residential and retail development.

The East Valley-based movement to prevent teen suicide ran into a temporary roadblock at the Arizona Legislature, where separate bills sponsored by two area legislators failed to gain adequate support. Republican-controlled committees in both chambers bottled up the bills, essentially killing them for this session. That move came despite the fact that at least 18 East Valley teens have taken their lives between July 24 and November, according to Chandler educator Katey McPherson’s unofficial count.

Teenagers crowded around a table rolling cabbage and pork in white flour skins to form spring rolls, before passing them to their teacher’s father, who fried them in a skillet during a popular Mandarin class in Chandler recently. The students were in the Mandarin 2 class that Wen Chiu teaches at Seton Catholic Preparatory, one of many Chandler schools that offer instruction on the complex, yet widely spoken Mandarin language. An elementary school and several junior high and

The bird is the word

It’s that time for the annual Chandler Ostrich Festival, and you can find all the details on page 33.