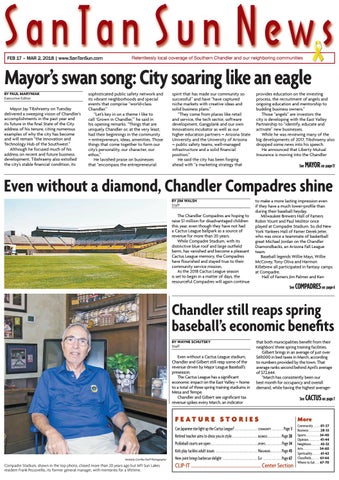 Mayor Jay Tibshraeny on Tuesday delivered a sweeping vision of Chandler’s accomplishments in the past year and its future in the final State of the City address of his tenure, citing numerous examples of why the city has become and will remain “the Innovation and Technology Hub of the Southwest.” Although he focused much of his address on recent and future business development, Tibshraeny also extolled the city’s stable financial condition, its

sophisticated public safety network and its vibrant neighborhoods and special events that comprise “world-class Chandler.” “Let’s key in on a theme I like to call ‘Grown in Chandler,’” he said in his opening remarks. “Things that are uniquely Chandler or, at the very least, had their beginnings in the community – entrepreneurs, ideas, amenities. Those things that come together to form our city’s personality, our character, our ethos.” He lavished praise on businesses that “encompass the entrepreneurial

spirit that has made our community so successful” and have “have captured niche markets with creative ideas and solid business plans.” “They come from places like retail and service, the tech sector, software development, Gangplank and our own Innovations incubator as well as our higher education partners – Arizona State University and the University of Arizona – public safety teams, well-managed infrastructure and a solid financial position.” He said the city has been forging ahead with “a marketing strategy that

provides education on the investing process, the recruitment of angels and ongoing education and mentorship to budding business owners.” Those “angels” are investors the city is developing with the East Valley Partnership to “identify, educate and activate” new businesses. While he was reviewing many of the big developments of 2017, Tibshraeny also dropped some news into his speech. He announced that Liberty Mutual Insurance is moving into the Chandler See

Even without a diamond, Chandler Compadres shine BY JIM WALSH Staff

The Chandler Compadres are hoping to raise $1 million for disadvantaged children this year, even though they have not had a Cactus League ballpark as a source of revenue for more than 20 years. While Compadre Stadium, with its distinctive blue roof and large outfield berm, has vanished and become a pleasant Cactus League memory, the Compadres have flourished and stayed true to their community service mission. As the 2018 Cactus League season is set to begin in a matter of days, the resourceful Compadres will again continue

to make a more lasting impression even if they have a much lower-profile than during their baseball heyday. Milwaukee Brewers Hall of Famers Robin Yount and Paul Molitor once played at Compadre Stadium. So did New York Yankees Hall of Famer Derek Jeter, who was once a teammate of basketball great Michael Jordan on the Chandler Diamondbacks, an Arizona Fall League team. Baseball legends Willie Mays, Willie McCovey, Tony Oliva and Harmon Killebrew all participated in fantasy camps at Compadre. Hall of Famers Jim Palmer and Ken See

Compadre Stadium, shown in the top photo, closed more than 20 years ago but left Sun Lakes resident Frank Pezzorello, its former general manager, with memories for a lifetime.

that both municipalities benefit from their neighbors’ three spring training facilities. Gilbert brings in an average of just over $69,000 in bed taxes in March, according to numbers provided by the town. That average ranks second behind April’s average of $72,644. “March has consistently been our best month for occupancy and overall demand, while having the highest averageSee