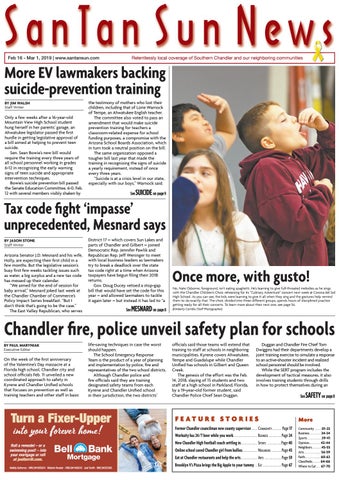 Only a few weeks after a 16-year-old Mountain View High School student hung herself in her parents’ garage, an Ahwatukee legislator passed the first hurdle in getting legislative approval of a bill aimed at helping to prevent teen suicide. Sen. Sean Bowie’s new bill would require the training every three years of all school personnel working in grades 6-12 in recognizing the early warning signs of teen suicide and appropriate intervention techniques. Bowie’s suicide prevention bill passed the Senate Education Committee, 6-0, Feb. 12 with several members visibly shaken by

the testimony of mothers who lost their children, including that of Lorie Warnock of Tempe, an Ahwatukee English teacher. The committee also voted to pass an amendment that would make suicide prevention training for teachers a classroom-related expense for school funding purposes, a compromise with the Arizona School Boards Association, which in turn took a neutral position on the bill. The same organization opposed a tougher bill last year that made the training in recognizing the signs of suicide a yearly requirement, instead of once every three years. “Suicide is at a crisis level in our state, especially with our boys,’’ Warnock said. See

Arizona Senator J.D. Mesnard and his wife, Holly, are expecting their first child in a few months. But the legislative session’s busy first few weeks tackling issues such as water, a big surplus and a new tax code has messed up their calendar. “We aimed for the end of session for baby arrival,” Mesnard joked last week at the Chandler Chamber of Commerce’s Policy Impact Series breakfast. “But I don’t think that’s going to be the case.” The East Valley Republican, who serves

District 17 – which covers Sun Lakes and parts of Chandler and Gilbert – joined Democratic Rep. Jennifer Pawlik and Republican Rep. Jeff Weninger to meet with local business leaders as lawmakers try to break a deadlock over the state tax code right at a time when Arizona taxpayers have begun filing their 2018 returns. Gov. Doug Ducey vetoed a stop-gap bill that would have set the code for this year – and allowed lawmakers to tackle it again later – but instead it has led to “a See

Once more, with gusto! No, Nate Osborne, foreground, isn’t eating spaghetti. He’s learning to give full-throated melodies as he sings with the Chandler Children’s Choir, rehearsing for its “Culinary Adventure” concert next week at Corona del Sol High School. As you can see, the kids were learning to give it all when they sing and the gestures help remind them to do exactly that. The choir, divided into three different groups, spends hours of disciplined practice getting ready for all their concerts. To learn more about their next one, see page 56. (Kimberly Carrillo/Staff Photographer)

On the week of the first anniversary of the Valentine’s Day massacre at a Florida high school, Chandler city and school officials Feb. 11 unveiled a new coordinated approach to safety in Kyrene and Chandler Unified schools that focuses on prevention as well as training teachers and other staff in basic

life-saving techniques in case the worst should happen. The School Emergency Response Team is the product of a year of planning and implementation by police, fire and representatives of the two school districts. Although Chandler police and fire officials said they are training designated safety teams from each Kyrene and Chandler Unified school in their jurisdiction, the two districts’

officials said those teams will extend that training to staff at schools in neighboring municipalities. Kyrene covers Ahwatukee, Tempe and Guadalupe while Chandler Unified has schools in Gilbert and Queen Creek. The genesis of the effort was the Feb. 14, 2018, slaying of 15 students and two staff at a high school in Parkland, Florida, by a 19-year-old former student, said Chandler Police Chief Sean Duggan.

Duggan and Chandler Fire Chief Tom Dwiggins had their departments develop a joint training exercise to simulate a response to an active-shooter incident and realized school personnel should be involved. While the SERT program includes the development of tactical measures, it also involves training students through drills in how to protect themselves during an See