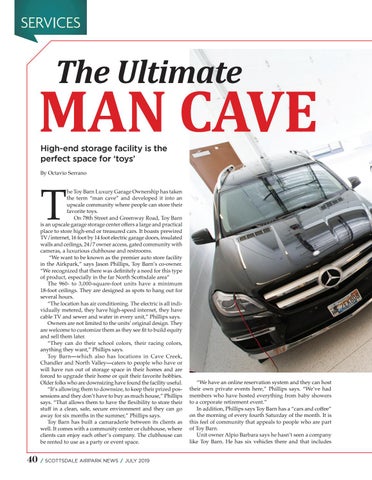 he Toy Barn Luxury Garage Ownership has taken the term “man cave” and developed it into an upscale community where people can store their favorite toys. On 78th Street and Greenway Road, Toy Barn is an upscale garage storage center offers a large and practical place to store high-end or treasured cars. It boasts prewired TV/internet, 16 foot by 14 foot electric garage doors, insulated walls and ceilings, 24/7 owner access, gated community with cameras, a luxurious clubhouse and restrooms. “We want to be known as the premier auto store facility in the Airkpark,” says Jason Phillips, Toy Barn’s co-owner. “We recognized that there was definitely a need for this type of product, especially in the far North Scottsdale area” The 960- to 3,000-square-foot units have a minimum 18-foot ceilings. They are designed as spots to hang out for several hours. “The location has air conditioning. The electric is all individually metered, they have high-speed internet, they have cable TV and sewer and water in every unit,” Phillips says. Owners are not limited to the units’ original design. They are welcome to customize them as they see fit to build equity and sell them later. “They can do their school colors, their racing colors, anything they want,” Phillips says. Toy Barn—which also has locations in Cave Creek, Chandler and North Valley—caters to people who have or will have run out of storage space in their homes and are forced to upgrade their home or quit their favorite hobbies. Older folks who are downsizing have found the facility useful. “It’s allowing them to downsize, to keep their prized possessions and they don’t have to buy as much house,” Phillips says. “That allows them to have the flexibility to store their stuff in a clean, safe, secure environment and they can go away for six months in the summer,” Phillips says. Toy Barn has built a camaraderie between its clients as well. It comes with a community center or clubhouse, where clients can enjoy each other’s company. The clubhouse can be rented to use as a party or event space.

“We have an online reservation system and they can host their own private events here,” Phillips says. “We’ve had members who have hosted everything from baby showers to a corporate retirement event.” In addition, Phillips says Toy Barn has a “cars and coffee” on the morning of every fourth Saturday of the month. It is this feel of community that appeals to people who are part of Toy Barn. Unit owner Alpio Barbara says he hasn’t seen a company like Toy Barn. He has six vehicles there and that includes