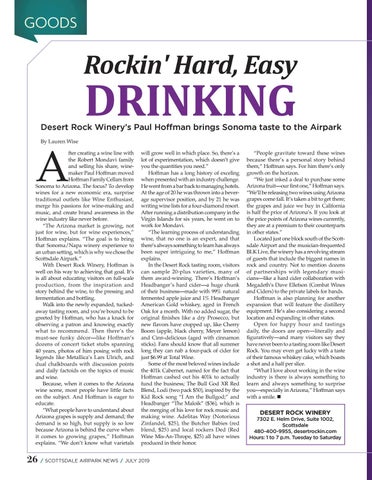 fter creating a wine line with the Robert Mondavi family and selling his share, winemaker Paul Hoffman moved Hoffman Family Cellars from Sonoma to Arizona. The focus? To develop wines for a new economic era, surprise traditional outlets like Wine Enthusiast, merge his passions for wine-making and music, and create brand awareness in the wine industry like never before. “The Arizona market is growing, not just for wine, but for wine experiences,” Hoffman explains. “The goal is to bring that Sonoma/Napa winery experience to an urban setting, which is why we chose the Scottsdale Airpark.” With Desert Rock Winery, Hoffman is well on his way to achieving that goal. It’s is all about educating visitors on full-scale production, from the inspiration and story behind the wine, to the pressing and fermentation and bottling. Walk into the newly expanded, tuckedaway tasting room, and you’re bound to be greeted by Hoffman, who has a knack for observing a patron and knowing exactly what to recommend. Then there’s the must-see funky décor—like Hoffman’s dozens of concert ticket stubs spanning 40 years, photos of him posing with rock legends like Metallica’s Lars Ulrich, and dual chalkboards with discussion points and daily factoids on the topics of music and wine. Because, when it comes to the Arizona wine scene, most people have little facts on the subject. And Hoffman is eager to educate. “What people have to understand about Arizona grapes is supply and demand; the demand is so high, but supply is so low because Arizona is behind the curve when it comes to growing grapes,” Hoffman explains. “We don’t know what varietals

will grow well in which place. So, there’s a lot of experimentation, which doesn’t give you the quantities you need.” Hoffman has a long history of exceling when presented with an industry challenge. He went from a bar back to managing hotels. At the age of 20 he was thrown into a beverage supervisor position, and by 21 he was writing wine lists for a four-diamond resort. After running a distribution company in the Virgin Islands for six years, he went on to work for Mondavi. “The learning process of understanding wine, that no one is an expert, and that there’s always something to learn has always been super intriguing to me,” Hoffman explains. In the Desert Rock tasting room, visitors can sample 20-plus varieties, many of them award-winning. There’s Hoffman’s Headbanger’s hard cider—a huge chunk of their business—made with 99% natural fermented apple juice and 1% Headbanger American Gold whiskey, aged in French Oak for a month. With no added sugar, the original finishes like a dry Prosecco, but new flavors have cropped up, like Cherry Boom (apple, black cherry, Meyer lemon) and Cinn-delicious (aged with cinnamon sticks). Fans should know that all summer long they can nab a four-pack of cider for just $6.99 at Total Wine. Some of the most beloved wines include the 401k Cabernet, named for the fact that Hoffman cashed out his 401k to actually fund the business; The Bull God XR Red Blend, Lodi (two pack $50), inspired by the Kid Rock song “I Am the Bullgod;” and Headbanger “The Maloik” ($36), which is the merging of his love for rock music and making wine. Adelitas Way (Notorious Zinfandel, $25), the Butcher Babies (red blend, $25) and local rockers Ded (Red Wine Mis-An-Thrope, $25) all have wines produced in their honor.

“People gravitate toward these wines because there’s a personal story behind them,” Hoffman says. For him there’s only growth on the horizon. “We just inked a deal to purchase some Arizona fruit—our first one,” Hoffman says. “We’ll be releasing two wines using Arizona grapes come fall. It’s taken a bit to get there; the grapes and juice we buy in California is half the price of Arizona’s. If you look at the price points of Arizona wines currently, they are at a premium to their counterparts in other states.” Located just one block south of the Scottsdale Airport and the musician-frequented BLK Live, the winery has a revolving stream of guests that include the biggest names in rock and country. Not to mention dozens of partnerships with legendary musicians—like a hard cider collaboration with Megadeth’s Dave Ellefson (Combat Wines and Ciders) to the private labels for bands. Hoffman is also planning for another expansion that will feature the distillery equipment. He’s also considering a second location and expanding in other states. Open for happy hour and tastings daily, the doors are open—literally and figuratively—and many visitors say they have never been to a tasting room like Desert Rock. You may even get lucky with a taste of their famous whiskey cake, which boasts a shot and a half per slice. “What I love about working in the wine industry is there is always something to learn and always something to surprise you—especially in Arizona,” Hoffman says with a smile. 