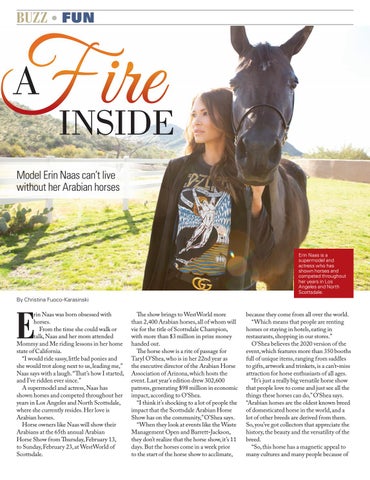 Erin Naas is a supermodel and actress who has shown horses and competed throughout her years in Los Angeles and North Scottsdale.

rin Naas was born obsessed with horses. From the time she could walk or talk, Naas and her mom attended Mommy and Me riding lessons in her home state of California. “I would ride sassy, little bad ponies and she would trot along next to us, leading me,” Naas says with a laugh. “That’s how I started, and I’ve ridden ever since.” A supermodel and actress, Naas has shown horses and competed throughout her years in Los Angeles and North Scottsdale, where she currently resides. Her love is Arabian horses. Horse owners like Naas will show their Arabians at the 65th annual Arabian Horse Show from Thursday, February 13, to Sunday, February 23, at WestWorld of Scottsdale.

The show brings to WestWorld more than 2,400 Arabian horses, all of whom will vie for the title of Scottsdale Champion, with more than $3 million in prize money handed out. The horse show is a rite of passage for Taryl O’Shea, who is in her 22nd year as the executive director of the Arabian Horse Association of Arizona, which hosts the event. Last year’s edition drew 302,600 patrons, generating $98 million in economic impact, according to O’Shea. “I think it’s shocking to a lot of people the impact that the Scottsdale Arabian Horse Show has on the community,” O’Shea says. “When they look at events like the Waste Management Open and Barrett-Jackson, they don’t realize that the horse show, it’s 11 days. But the horses come in a week prior to the start of the horse show to acclimate,

because they come from all over the world. “Which means that people are renting homes or staying in hotels, eating in restaurants, shopping in our stores.” O’Shea believes the 2020 version of the event, which features more than 350 booths full of unique items, ranging from saddles to gifts, artwork and trinkets, is a can’t-miss attraction for horse enthusiasts of all ages. “It’s just a really big versatile horse show that people love to come and just see all the things these horses can do,” O’Shea says. “Arabian horses are the oldest known breed of domesticated horse in the world, and a lot of other breeds are derived from them. So, you’ve got collectors that appreciate the history, the beauty and the versatility of the breed. “So, this horse has a magnetic appeal to many cultures and many people because of