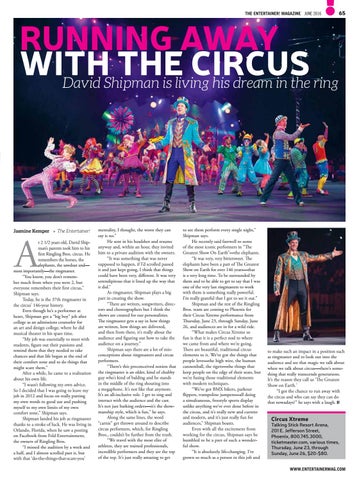 t 2 1/2 years old, David Shipman’s parents took him to his first Ringling Bros. circus. He remembers the horses, the elephants, the sawdust and— most importantly—the ringmaster. “You know, you don’t remember much from when you were 2, but everyone remembers their first circus,” Shipman says. Today, he is the 37th ringmaster in the circus’ 146-year history. Even though he’s a performer at heart, Shipman got a “big boy” job after college as an admissions counselor for an art and design college, where he did musical theater in his spare time. “My job was essentially to meet with students, figure out their passions and remind them that they needed to take chances and that life began at the end of their comfort zone and to do things that might scare them.” After a while, he came to a realization about his own life. “I wasn’t following my own advice. So I decided that I was going to leave my job in 2012 and focus on really putting my own words to good use and pushing myself to my own limits of my own comfort zone,” Shipman says. Shipman landed his job as ringmaster thanks to a stroke of luck. He was living in Orlando, Florida, when he saw a posting on Facebook from Feld Entertainment, the owners of Ringling Bros. “I missed the audition by a week and a half, and I almost scrolled past it, but with that ‘do-the-things-that-scare-you’

mentality, I thought, the worst they can say is no.” He sent in his headshot and resume anyway and, within an hour, they invited him to a private audition with the owners. “It was something that was never supposed to happen, if I’d scrolled passed it and just kept going, I think that things could have been very, different. It was very serendipitous that it lined up the way that it did.” As ringmaster, Shipman plays a big part in creating the show. “There are writers, songwriters, directors and choreographers but I think the shows are created for our personalities. The ringmaster gets a say in how things are written, how things are delivered, and then from there, it’s really about the audience and figuring out how to take the audience on a journey.” Shipman says there are a lot of misconceptions about ringmasters and circus performers. “There’s this preconceived notion that the ringmaster is an older, kind of chubby guy who’s kind of balding and he stands in the middle of the ring shouting into a megaphone. It’s not like that anymore. It’s an all-inclusive role. I get to sing and interact with the audience and the cast. It’s not just barking orders—it’s the showmanship style, which is fun,” he says. Along the same lines, the word “carnie” get thrown around to describe circus performers, which, for Ringling Bros., couldn’t be further from the truth. “We travel with the most elite of athletes, they are trained professionals, incredible performers and they are the top of the top. It’s just really amazing to get

to see them perform every single night,” Shipman says. He recently said farewell to some of the most iconic performers in “The Greatest Show On Earth”—the elephants. “It was very, very bittersweet. The elephants have been a part of The Greatest Show on Earth for over 146 years—that is a very long time. To be surrounded by them and to be able to get to say that I was one of the very last ringmasters to work with them is something really powerful. I’m really grateful that I got to see it out.” Shipman and the rest of the Ringling Bros. team are coming to Phoenix for their Circus Xtreme performance from Thursday, June 23, through Sunday, June 26, and audiences are in for a wild ride. “What makes Circus Xtreme so fun is that it is a perfect nod to where we came from and where we’re going. There are beautiful, traditional circus elements to it. We’ve got the things that people love—the high wire, the human cannonball, the tigers—the things that keep people on the edge of their seats, but we’re fusing those traditional elements with modern techniques. “We’ve got BMX bikers, parkour flippers, trampoline jumpers—all doing a simultaneous, freestyle sports display unlike anything we’ve ever done before in the circus, and it’s really new and current and modern, and it’s just really fun for audiences,” Shipman boasts. Even with all the excitement from working for the circus, Shipman says he humbled to be a part of such a wonderful show. “It is absolutely life-changing. I’ve grown so much as a person in this job and

to make such an impact in a position such as ringmaster and to look out into the audience and see that magic we talk about when we talk about circus—there’s something that really transcends generations. It’s the reason they call us ‘The Greatest Show on Earth.’ “I got the chance to run away with the circus and who can say they can do that nowadays?” he says with a laugh.