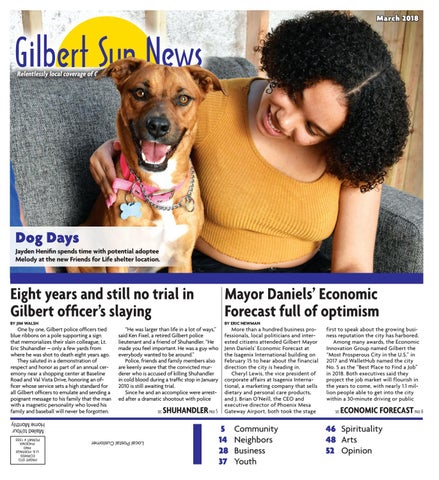 Relentlessly local coverage of Gilbert and our neighboring communities

Eight years and still no trial in Gilbert officer’s slaying

One by one, Gilbert police officers tied blue ribbons on a pole supporting a sign that memorializes their slain colleague, Lt. Eric Shuhandler – only a few yards from where he was shot to death eight years ago. They saluted in a demonstration of respect and honor as part of an annual ceremony near a shopping center at Baseline Road and Val Vista Drive, honoring an officer whose service sets a high standard for all Gilbert officers to emulate and sending a poignant message to his family that the man with a magnetic personality who loved his family and baseball will never be forgotten.

“He was larger than life in a lot of ways,’’ said Ken Fixel, a retired Gilbert police lieutenant and a friend of Shuhandler. “He made you feel important. He was a guy who everybody wanted to be around.’’ Police, friends and family members also are keenly aware that the convicted murderer who is accused of killing Shuhandler in cold blood during a traffic stop in January 2010 is still awaiting trial. Since he and an accomplice were arrested after a dramatic shootout with police see

More than a hundred business professionals, local politicians and interested citizens attended Gilbert Mayor Jenn Daniels’ Economic Forecast at the Isagenix International building on February 15 to hear about the financial direction the city is heading in. Cheryl Lewis, the vice president of corporate affairs at Isagenix International, a marketing company that sells dietary and personal care products, and J. Brian O’Neill, the CEO and executive director of Phoenix Mesa Gateway Airport, both took the stage

first to speak about the growing business reputation the city has harbored. Among many awards, the Economic Innovation Group named Gilbert the “Most Prosperous City in the U.S.” in 2017 and WalletHub named the city No. 5 as the “Best Place to Find a Job” in 2018. Both executives said they project the job market will flourish in the years to come, with nearly 1.1 million people able to get into the city within a 30-minute driving or public see