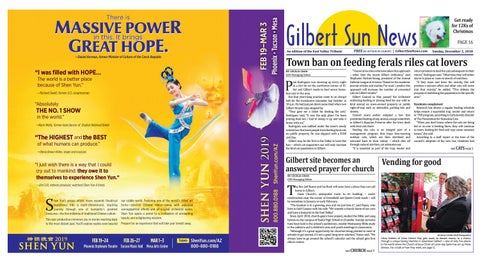 Get ready for 12Ks of Christmas

FREE ($1 OUTSIDE OF GILBERT) | GilbertSunNews.com

aul Rodriguez was showing up every night at a dirt lot on the northwest corner of Elliot and Gilbert roads to feed seven homeless cats in the area. But that years-long practice came to an abrupt halt for the investment counselor last October at 10 p.m. He had just put down some food when two Gilbert bicycle cops stopped by. “They gave me a ticket for feeding the cats,” Rodriguez said. “It was the only place I’ve been putting food out. I had to sweep it up and take it home with me.” Rodriguez was nabbed under the town’s newly minted law that bans people from feeding feral cats on public property. He was slapped with a $100 civil fine. Gilbert may be the first in the Valley to have this ban – which cat supporters say will only increase the feral cat population in Gilbert.

“I know of no cities who have taken this approach – other than the recent Gilbert ordinance,” said Stephanie Nichols-Young, president of the Animal Defense League of Arizona. “Based on the academic journal articles and studies I’ve read, I predict this approach will increase the number of unwanted cats on Gilbert streets.” Gilbert Council in May passed the ordinance outlawing feeding or placing food for any wild or feral animal on town-owned property or public right-of-way such as sidewalks, parking lots and streets. Council years earlier adopted a law that prohibited feeding of any animal, except waterfowl, in Gilbert’s Riparian Preserve after the town dealt with feral cats there. Feeding the cats is an integral part of a management program that traps free-roaming outdoor cats, which are then sterilized and returned back to their colony – which dies off through natural attrition, cat advocates say. “It is essential as part of the trap, neuter and

return protocol to feed the cats subsequent to their return,” Rodriguez said. “Otherwise they will either starve in place or roam in search of nutrition. “If they roam and leave the vicinity, this will produce a vacuum effect and other cats will move into that vicinity,” he added. “This defeats the purpose of stabilizing the population in the specific area.” Residents complained Research has shown a regular feeding schedule helps ensure a successful trap, neuter and return or TNR program, according to Carla Jewell, director of The Foundation for Homeless Cats. “When you don’t know where the cats are being fed or no one is feeding them, they will continue to roam, looking for food and may cause nuisance issues,” she said. According to a staff report at the time of the council’s adoption of the new law, residents had

he Rev. Jeff Royce and his flock will soon have a place they can call home in Gilbert. Oasis Church’s anticipated move to its building – under construction near the corner of Greenfield and Queen Creek roads – will be sometime in January or early February. “The location is in a growing area and we just love it,” said Royce, who lives in Gold Canyon with his wife. “We wanted a church home of our own and have a footprint in the East Valley.” Since April 2010, church-goers have prayed, studied the Bible and sang hymns on the campus of Basha High School in Chandler. Sunday sermons have been held in the school’s auditorium, weekly Wednesday Bible study in the cafeteria and a children’s area and youth meetings in classrooms. “Although it’s a great opportunity for churches being planted to meet at schools to get started, it’s not a good long-term solution,” Royce said. “We always have to go around the school’s calendar and the school gets first dibs in rooms.

Alicia Holmes of Mesa United Way gets ready to donate money to a charity through a unique Giving Machine in downtown Gilbert – one of only five places in the world where the Church of Jesus Christ of Latter-day Saints has set up these devices. For a look at how they work, see page 12.