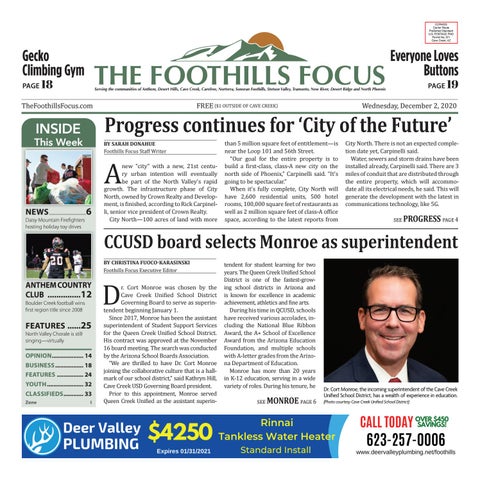 FREE ($1 OUTSIDE OF CAVE CREEK)

new “city” with a new, 21st century urban intention will eventually be part of the North Valley’s rapid growth. The infrastructure phase of City North, owned by Crown Realty and Development, is finished, according to Rick Carpinelli, senior vice president of Crown Realty. City North—100 acres of land with more

than 5 million square feet of entitlement—is near the Loop 101 and 56th Street. “Our goal for the entire property is to build a first-class, class-A new city on the north side of Phoenix,” Carpinelli said. “It’s going to be spectacular.” When it’s fully complete, City North will have 2,600 residential units, 500 hotel rooms, 100,000 square feet of restaurants as well as 2 million square feet of class-A office space, according to the latest reports from

City North. There is not an expected completion date yet, Carpinelli said. Water, sewers and storm drains have been installed already, Carpinelli said. There are 3 miles of conduit that are distributed through the entire property, which will accommodate all its electrical needs, he said. This will generate the development with the latest in communications technology, like 5G.

CCUSD board selects Monroe as superintendent

r. Cort Monroe was chosen by the Cave Creek Unified School District Governing Board to serve as superintendent beginning January 1. Since 2017, Monroe has been the assistant superintendent of Student Support Services for the Queen Creek Unified School District. His contract was approved at the November 16 board meeting. The search was conducted by the Arizona School Boards Association. “We are thrilled to have Dr. Cort Monroe joining the collaborative culture that is a hallmark of our school district,” said Kathryn Hill, Cave Creek USD Governing Board president. Prior to this appointment, Monroe served Queen Creek Unified as the assistant superin-

tendent for student learning for two years. The Queen Creek Unified School District is one of the fastest-growing school districts in Arizona and is known for excellence in academic achievement, athletics and fine arts. During his time in QCUSD, schools have received various accolades, including the National Blue Ribbon Award, the A+ School of Excellence Award from the Arizona Education Foundation, and multiple schools with A-letter grades from the Arizona Department of Education. Monroe has more than 20 years in K-12 education, serving in a wide variety of roles. During his tenure, he