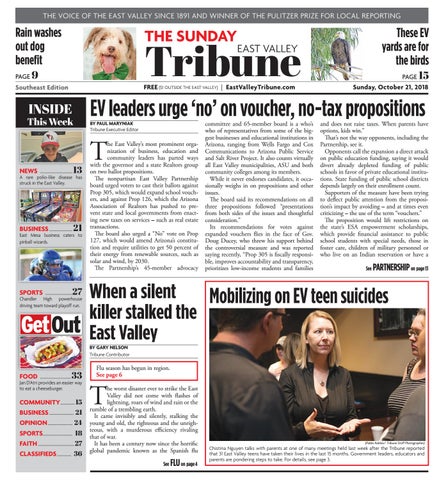 A rare polio-like disease has struck in the East Valley.

FREE ($1 OUTSIDE THE EAST VALLEY) | EastValleyTribune.com

he East Valley’s most prominent organization of business, education and community leaders has parted ways with the governor and a state Realtors group on two ballot propositions. The nonpartisan East Valley Partnership board urged voters to cast their ballots against Prop 305, which would expand school vouchers, and against Prop 126, which the Arizona Association of Realtors has pushed to prevent state and local governments from enacting new taxes on services – such as real estate transactions. The board also urged a “No” vote on Prop 127, which would amend Arizona’s constitution and require utilities to get 50 percent of their energy from renewable sources, such as solar and wind, by 2030. The Partnership’s 45-member advocacy

committee and 65-member board is a who’s who of representatives from some of the biggest businesses and educational institutions in Arizona, ranging from Wells Fargo and Cox Communications to Arizona Public Service and Salt River Project. It also counts virtually all East Valley municipalities, ASU and both community colleges among its members. While it never endorses candidates, it occasionally weighs in on propositions and other issues. The board said its recommendations on all three propositions followed “presentations from both sides of the issues and thoughtful consideration.” Its recommendations for votes against expanded vouchers flies in the face of Gov. Doug Ducey, who threw his support behind the controversial measure and was reported saying recently, “Prop 305 is fiscally responsible, improves accountability and transparency, prioritizes low-income students and families

and does not raise taxes. When parents have options, kids win.” That’s not the way opponents, including the Partnership, see it. Opponents call the expansion a direct attack on public education funding, saying it would divert already depleted funding of public schools in favor of private educational institutions. State funding of public school districts depends largely on their enrollment count. Supporters of the measure have been trying to deflect public attention from the proposition’s impact by avoiding – and at times even criticizing – the use of the term “vouchers.” The proposition would lift restrictions on the state’s ESA empowerment scholarships, which provide financial assistance to public school students with special needs, those in foster care, children of military personnel or who live on an Indian reservation or have a See

Jan D’Atri provides an easier way to eat a cheeseburger.

he worst disaster ever to strike the East Valley did not come with flashes of lightning, roars of wind and rain or the rumble of a trembling earth. It came invisibly and silently, stalking the young and old, the righteous and the unrighteous, with a murderous efficiency rivaling that of war. It has been a century now since the horrific global pandemic known as the Spanish flu See

Chistina Nguyen talks with parents at one of many meetings held last week after the Tribune reported that 31 East Valley teens have taken their lives in the last 15 months. Government leaders, educators and parents are pondering steps to take. For details, see page 3.