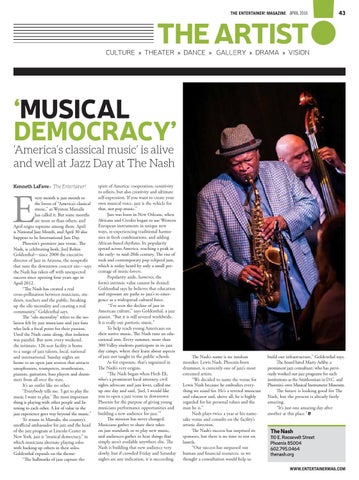 ‘MUSICAL DEMOCRACY’ ‘America’s classical music’ is alive and well at Jazz Day at The Nash Kenneth LaFave» The Entertainer!

very month is jazz month to the lovers of “America’s classical music,” as Wynton Marsalis has called it. But some months are more so than others, and April reigns supreme among them. April is National Jazz Month, and April 30 also happens to be International Jazz Day. Phoenix’s premiere jazz venue, The Nash, is celebrating both. Joel Robin Goldenthal—since 2000 the executive director of Jazz in Arizona, the nonprofit that runs the downtown concert site—says the Nash has taken off with unexpected success since opening four years ago in April 2012. “The Nash has created a real cross-pollination between musicians, students, teachers and the public, breaking up the silo mentality and creating a real community,” Goldenthal says. The “silo mentality” refers to the isolation felt by jazz musicians and jazz fans who lack a focal point for their passion. Until the Nash came along, that isolation was painful. But now, every weekend, the intimate, 126-seat facility is home to a range of jazz talents, local, national and international. Sunday nights are home to an open jam session that attracts saxophonists, trumpeters, trombonists, pianists, guitarists, bass players and drummers from all over the state. It’s an outlet like no other. “Everybody tells me, ‘I get to play the music I want to play.’ The most important thing is playing with other people and listening to each other. A lot of value in the jazz experience goes way beyond the music.” To return to Marsalis, the country’s unofficial ambassador for jazz and the head of the jazz program at Lincoln Center in New York, jazz is “musical democracy,” in which musicians alternate playing solos with backing up others in their solos. Goldenthal expands on the theme: “The hallmarks of jazz capture the

spirit of America: cooperation, sensitivity to others, but also creativity and ultimate self-expression. If you want to create your own musical voice, jazz is the vehicle for that, not pop music.” Jazz was born in New Orleans, when Africans and Creoles began to use Western European instruments in unique new ways, re-experiencing traditional harmonies in fresh combinations, and adding African-based rhythms. Its popularity spread across America, reaching a peak in the early- to mid-20th century. The rise of rock and contemporary pop eclipsed jazz, which is today heard by only a small percentage of music-lovers. Popularity aside, however, the form’s intrinsic value cannot be denied. Goldenthal says he believes that education and exposure are paths to jazz’s re-emergence as a widespread cultural force. “I’ve seen the decline of jazz in American culture,” says Goldenthal, a jazz pianist. “But it is still revered worldwide. It is really our patriotic music.” To help teach young Americans on their native music, The Nash runs an educational arm. Every summer, more than 300 Valley students participate in its jazz day camps, where they learn about aspects of jazz not taught in the public schools. As for exposure, that’s ingrained in The Nash’s very origins. “The Nash began when Herb Eli, who’s a prominent local attorney, civil rights advocate and jazz lover, called me up one day and said, ‘Joel, I would like you to open a jazz venue in downtown Phoenix for the purpose of giving young musicians performance opportunities and building a new audience for jazz.’” The mission has never changed. Musicians gather to share their takes on jazz standards or to play new music, and audiences gather to hear things that simply aren’t available anywhere else. The Nash is building that new audience very slowly, but if crowded Friday and Saturday nights are any indication, it is succeeding.

The Nash’s name is no random moniker. Lewis Nash, Phoenix-born drummer, is currently one of jazz’s most esteemed artists. “We decided to name the venue for Lewis Nash because he embodies everything we stand for. He’s a revered musician and educator and, above all, he is highly regarded for his personal values and the man he is.” Nash plays twice a year at his namesake venue and consults on the facility’s artistic direction. The Nash’s success has surprised its sponsors, but there is no time to rest on laurels. “Our success has surpassed our human and financial resources, so we thought a consultation would help us

build our infrastructure,” Goldenthal says. The board hired Marty Ashby, a prominent jazz consultant, who has previously worked out jazz programs for such institutions as the Smithsonian in D.C. and Phoenix’s own Musical Instrument Museum. The future is looking good for The Nash, but the present is already fairly amazing. “It’s just one amazing day after another at this place.”