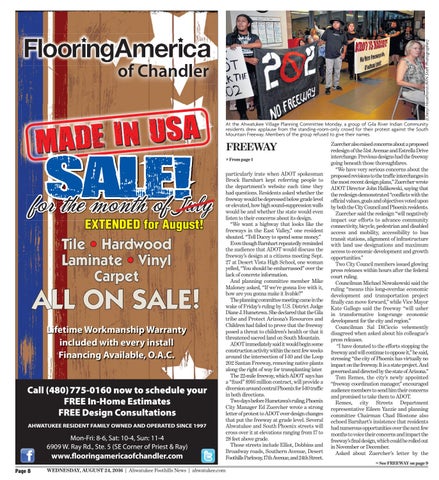 SALE! for the month of July EXTENDED for August!

ALL ON SALE! Lifetime Workmanship Warranty included with every install Financing Available, O.A.C.

At the Ahwatukee Village Planning Committee Monday, a group of Gila River Indian Community residents drew applause from the standing-room-only crowd for their protest against the South Mountain Freeway. Members of the group refused to give their names.

particularly irate when ADOT spokesman Brock Barnhart kept referring people to the department’s website each time they had questions. Residents asked whether the freeway would be depressed below grade level or elevated, how high sound-suppression walls would be and whether the state would even listen to their concerns about its design. “We want a highway that looks like the freeways in the East Valley,” one resident shouted. “Tell Ducey to spend some money.” Even though Barnhart repeatedly reminded the audience that ADOT would discuss the freeway’s design at a citizens meeting Sept. 27 at Desert Vista High School, one woman yelled, “You should be embarrassed” over the lack of concrete information. And planning committee member Mike Maloney asked, “If we’re gonna live with it, how are you gonna make it livable?” The planning committee meeting came in the wake of Friday’s ruling by U.S. District Judge Diane J. Humetewa. She declared that the Gila tribe and Protect Arizona’s Resources and Children had failed to prove that the freeway posed a threat to children’s health or that it threatened sacred land on South Mountain. ADOT immediately said it would begin some construction activity within the next few weeks around the intersection of I-10 and the Loop 202 Santan Freeway, removing native plants along the right of way for transplanting later. The 22-mile freeway, which ADOT says has a “fixed” $916 million contract, will provide a diversion around central Phoenix for I-10 traffic in both directions. Two days before Humetawa’s ruling, Phoenix City Manager Ed Zuercher wrote a strong letter of protest to ADOT over design changes that put the freeway at grade level. Several Ahwatukee and South Phoenix streets will cross over it at elevations ranging from 17 to 28 feet above grade. Those streets include Elliot, Dobbins and Broadway roads, Southern Avenue, Desert Foothills Parkway, 17th Avenue, and 24th Street.

Zuercher also raised concerns about a proposed redesign of the 51st Avenue and Estrella Drive interchange. Previous designs had the freeway going beneath those thoroughfares. “We have very serious concerns about the proposed revisions to the traffic interchanges in the most recent design plans,” Zuercher wrote ADOT Director John Halikowski, saying that the redesign demonstrated “conflicts with the official values, goals and objectives voted upon by both the City Council and Phoenix residents. Zuercher said the redesign “will negatively impact our efforts to advance community connectivity, bicycle, pedestrian and disabled access and mobility, accessibility to bus transit stations, alignment of infrastructure with land use designations and maximum access to economic development and growth opportunities.” Two City Council members issued glowing press releases within hours after the federal court ruling. Councilman Michael Nowakowski said the ruling “means this long-overdue economic development and transportation project finally can move forward,” while Vice Mayor Kate Gallego said the freeway “will usher in transformative long-range economic development for the city and region.” Councilman Sal DiCiccio vehemently disagreed when asked about his colleague’s press releases. “I have donated to the efforts stopping the freeway and will continue to oppose it,” he said, stressing “the city of Phoenix has virtually no impact on the freeway. It is a state project. And governed and directed by the state of Arizona.” Tom Remes, the city’s newly appointed “freeway coordination manager,” encouraged audience members to send him their concerns and promised to take them to ADOT. Remes, city Streets Department representative Eileen Yazzie and planning committee Chairman Chad Blostone also echoed Barnhart’s insistence that residents had numerous opportunities over the next few months to voice their concerns and impact the freeway’s final design, which could be rolled out in November or December. Asked about Zuercher’s letter by the >> See FREEWAY on page 9