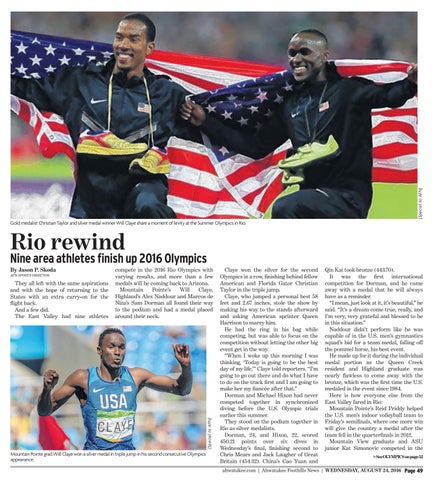 Gold medalist Christian Taylor and silver medal winner Will Claye share a moment of levity at the Summer Olympics in Rio.

They all left with the same aspirations and with the hope of returning to the States with an extra carry-on for the flight back. And a few did. The East Valley had nine athletes

compete in the 2016 Rio Olympics with varying results, and more than a few medals will be coming back to Arizona. Mountain Pointe’s Will Claye, Highland’s Alex Naddour and Marcos de Niza’s Sam Dorman all found their way to the podium and had a medal placed around their neck.

Claye won the silver for the second Olympics in a row, finishing behind fellow American and Florida Gator Christian Taylor in the triple jump. Claye, who jumped a personal best 58 feet and 2.67 inches, stole the show by making his way to the stands afterward and asking American sprinter Queen Harrison to marry him. He had the ring in his bag while competing, but was able to focus on the competition without letting the other big event get in the way. “When I woke up this morning I was thinking, ‘Today is going to be the best day of my life,’” Claye told reporters. “I’m going to go out there and do what I have to do on the track first and I am going to make her my fiancée after that.” Dorman and Michael Hixon had never competed together in synchronized diving before the U.S. Olympic trials earlier this summer. They stood on the podium together in Rio as silver medalists. Dorman, 24, and Hixon, 22, scored 450.21 points over six dives in Wednesday’s final, finishing second to Chris Mears and Jack Laugher of Great Britain (454.32). China’s Cao Yuan and

Qin Kai took bronze (443.70). It was the first international competition for Dorman, and he came away with a medal that he will always have as a reminder. “I mean, just look at it, it’s beautiful,” he said. “It’s a dream come true, really, and I’m very, very grateful and blessed to be in this situation.” Naddour didn’t perform like he was capable of in the U.S. men’s gymnastics squad’s bid for a team medal, falling off the pommel horse, his best event. He made up for it during the individual medal portion as the Queen Creek resident and Highland graduate was nearly flawless to come away with the bronze, which was the first time the U.S. medaled in the event since 1984. Here is how everyone else from the East Valley fared in Rio: Mountain Pointe’s Reid Priddy helped the U.S. men’s indoor volleyball team to Friday’s semifinals, where one more win will give the country a medal after the team fell in the quarterfinals in 2012. Mountain View graduate and ASU junior Kat Simonovic competed in the >> See OLYMPICS on page 52