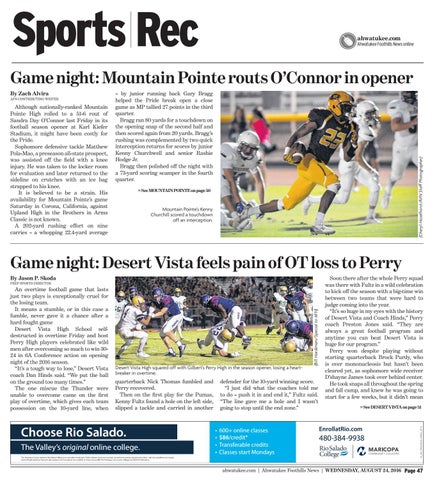 Although nationally-ranked Mountain Pointe High rolled to a 51-6 rout of Sandra Day O’Connor last Friday in its football season opener at Karl Kiefer Stadium, it might have been costly for the Pride. Sophomore defensive tackle Matthew Pola-Mao, a preseason all-state prospect, was assisted off the field with a knee injury. He was taken to the locker room for evaluation and later returned to the sideline on crutches with an ice bag strapped to his knee. It is believed to be a strain. His availability for Mountain Pointe’s game Saturday in Corona, California, against Upland High in the Brothers in Arms Classic is not known. A 202-yard rushing effort on nine carries – a whopping 22.4-yard average

– by junior running back Gary Bragg helped the Pride break open a close game as MP tallied 27 points in the third quarter. Bragg ran 80 yards for a touchdown on the opening snap of the second half and then scored again from 20 yards. Bragg’s rushing was complemented by two quick interception returns for scores by junior Kenny Churchwell and senior Rashie Hodge Jr. Bragg then polished off the night with a 73-yard scoring scamper in the fourth quarter.

Mountain Pointe’s Kenny Churchill scored a touchdown off an interception.

Game night: Desert Vista feels pain of OT loss to Perry An overtime football game that lasts just two plays is exceptionally cruel for the losing team. It means a stumble, or in this case a fumble, never gave it a chance after a hard fought game Desert Vista High School selfdestructed in overtime Friday and host Perry High players celebrated like wild men after overcoming so much to win 3024 in 6A Conference action on opening night of the 2016 season. “It’s a tough way to lose,” Desert Vista coach Dan Hinds said. “We put the ball on the ground too many times.” The one miscue the Thunder were unable to overcome came on the first play of overtime, which gives each team possession on the 10-yard line, when

Desert Vista High squared off with Gilbert’s Perry High in the season opener, losing a heartbreaker in overtime.

quarterback Nick Thomas fumbled and Perry recovered. Then on the first play for the Pumas, Kenny Fultz found a hole on the left side, slipped a tackle and carried in another

defender for the 10-yard winning score. “I just did what the coaches told me to do – push it in and end it,” Fultz said. “The line gave me a hole and I wasn’t going to stop until the end zone.”

Soon there after the whole Perry squad was there with Fultz in a wild celebration to kick off the season with a big-time win between two teams that were hard to judge coming into the year. “It’s so huge in my eyes with the history of Desert Vista and Coach Hinds,” Perry coach Preston Jones said. “They are always a great football program and anytime you can beat Desert Vista is huge for our program.” Perry won despite playing without starting quarterback Brock Purdy, who is over mononucleosis but hasn’t been cleared yet, as sophomore wide receiver D’shayne James took over behind center. He took snaps all throughout the spring and fall camp, and knew he was going to start for a few weeks, but it didn’t mean >> See DESERT VISTA on page 51