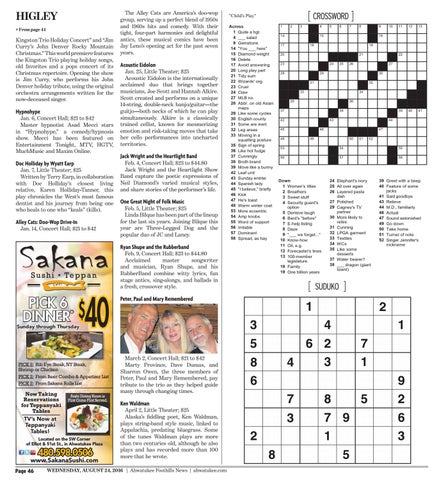 Doc Holliday by Wyatt Earp Jan. 7, Little Theater; $25 Written by Terry Earp, in collaboration with Doc Holliday’s closest living relative, Karen Holliday-Tanner, this play chronicles the West’s most famous dentist and his journey from being one who heals to one who “keals” (kills).

The Alley Cats are America’s doo-wop group, serving up a perfect blend of 1950s and 1960s hits and comedy. With their tight, four-part harmonies and delightful antics, these musical comics have been Jay Leno’s opening act for the past seven years.

Acoustic Eidolon Jan. 25, Little Theater; $25 Acoustic Eidolon is the internationally acclaimed duo that brings together musicians, Joe Scott and Hannah Alkire. Scott created and performs on a unique 14-string, double-neck banjo/guitar—the guitjo—both necks of which he can play simultaneously. Alkire is a classically trained cellist, known for mesmerizing emotion and risk-taking moves that take her cello performances into uncharted territories.

One Great Night of Folk Music Feb. 5, Little Theater; $25 Linda Bilque has been part of the lineup for the last six years. Joining Bilque this year are Three-Legged Dog and the popular duo of JC and Laney.

Ryan Shupe and the Rubberband

Located on the SW Corner of Elliot & 51st St., in Ahwatukee Plaza

March 2, Concert Hall; $21 to $42 Marty Province, Dave Dumas, and Sharron Owen, the three members of Peter, Paul and Mary Remembered, pay tribute to the trio as they helped guide many through changing times.