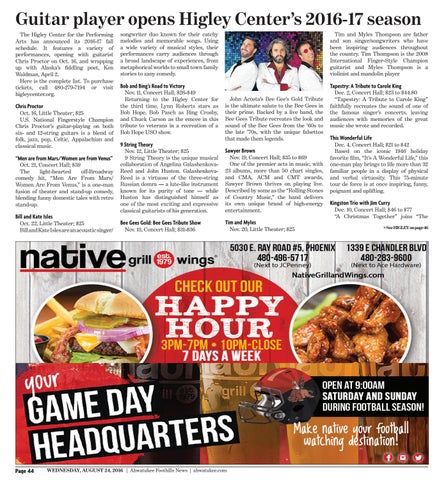 Guitar player opens Higley Center’s 2016-17 season The Higley Center for the Performing Arts has announced its 2016-17 fall schedule. It features a variety of performances, opening with guitarist Chris Proctor on Oct. 16, and wrapping up with Alaska’s fiddling poet, Ken Waldman, April 2. Here is the complete list. To purchase tickets, call 480-279-7194 or visit higleycenter.org.

“Men are from Mars/Women are from Venus” Oct. 21, Concert Hall; $59 The light-hearted off-Broadway comedy hit, “Men Are From Mars/ Women Are From Venus,” is a one-man fusion of theater and stand-up comedy, blending funny domestic tales with retro stand-up.

songwriter duo known for their catchy melodies and memorable songs. Using a wide variety of musical styles, their performances carry audiences through a broad landscape of experiences, from metaphorical worlds to small town family stories to zany comedy.

Bob and Bing’s Road to Victory

Tapestry: A Tribute to Carole King

Nov. 11, Concert Hall; $26-$49 Returning to the Higley Center for the third time, Lynn Roberts stars as Bob Hope, Bob Pasch as Bing Crosby, and Chuck Carson as the emcee in this tribute to veterans in a recreation of a Bob Hope USO show.

John Acosta’s Bee Gee’s Gold Tribute is the ultimate salute to the Bee Gees in their prime. Backed by a live band, the Bee Gees Tribute recreates the look and sound of the Bee Gees from the ’60s to the late ’70s, with the unique falsettos that made them legends.

Nov. 12, Little Theater; $25 9 String Theory is the unique musical collaboration of Angelina GalashenkovaReed and John Huston. GalashenkovaReed is a virtuoso of the three-string Russian domra — a lute-like instrument known for its purity of tone — while Huston has distinguished himself as one of the most exciting and expressive classical guitarists of his generation.

Nov. 19, Concert Hall; $35 to $69 One of the premier acts in music, with 23 albums, more than 50 chart singles, and CMA, ACM and CMT awards, Sawyer Brown thrives on playing live. Described by some as the “Rolling Stones of Country Music,” the band delivers its own unique brand of high-energy entertainment.

Dec. 2, Concert Hall; $23 to $44.80 “Tapestry: A Tribute to Carole King” faithfully recreates the sound of one of the famous singer’s concerts, leaving audiences with memories of the great music she wrote and recorded.

This Wonderful Life Dec. 4, Concert Hall; $21 to $42 Based on the iconic 1946 holiday favorite film, “It’s A Wonderful Life,” this one-man play brings to life more than 32 familiar people in a display of physical and verbal virtuosity. This 75-minute tour de force is at once inspiring, funny, poignant and uplifting.