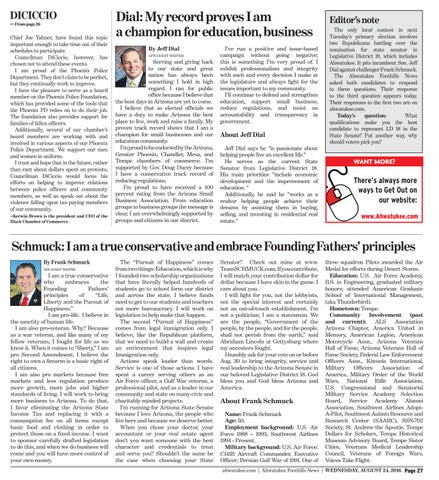 Chief Joe Yahner, have found this topic important enough to take time out of their schedules to participate. Councilman DiCiccio, however, has chosen not to attend these events. I am proud of the Phoenix Police Department. They don’t claim to be perfect, but they continually work to improve. I have the pleasure to serve as a board member on the Phoenix Police Foundation, which has provided some of the tools that the Phoenix PD relies on to do their job. The foundation also provides support for families of fallen officers. Additionally, several of our chamber’s board members are working with and involved in various aspects of our Phoenix Police Department. We support our men and women in uniform. I trust and hope that in the future, rather than rant about dollars spent on protests, Councilman DiCiccio would focus his efforts on helping to improve relations between police officers and community members, as well as speak out about the violence falling upon tax paying members of our community. –Kerwin Brown is the president and CEO of the Black Chamber of Commerce.

Dial: My record proves I am a champion for education, business By Jeff Dial AFN GUEST WRITER

Serving and giving back to our state and great nation has always been something I hold in high regard. I ran for public office because I believe that the best days in Arizona are yet to come. I believe that as elected officials we have a duty to make Arizona the best place to live, work and raise a family. My proven track record shows that I am a champion for small businesses and our education community. I’m proud to be endorsed by the Arizona, Greater Phoenix, Chandler, Mesa, and Tempe chambers of commerce. I’m supported by Gov. Doug Ducey because I have a conservative track record of reducing regulations. I’m proud to have received a 100 percent rating from the Arizona Small Business Association. From education groups to business groups the message is clear, I am overwhelmingly supported by groups and citizens in our district.

I’ve run a positive and issue-based campaign without going negative; this is something I’m very proud of. I exhibit professionalism and integrity with each and every decision I make at the legislature and always fight for the issues important to my community. I’ll continue to defend and strengthen education, support small business, reduce regulations, and insist on accountability and transparency in government.

About Jeff Dial Jeff Dial says he "is passionate about helping people live an excellent life." He serves as the current State Senator from Legislative District 18. His main priorities "include economic development and the improvement of education. " Additionally, he said he "works as a realtor helping people achieve their dreams by assisting them in buying, selling, and investing in residential real estate."

Editor’s note The only local contest in next Tuesday’s primary election involves two Republicans battling over the nomination for state senator in Legislative District 18, which includes Ahwatukee. It pits incumbent Sen. Jeff Dial against challenger Frank Schmuck. The Ahwatukee Foothills News asked both candidates to respond to three questions. Their response to the third question appears today. Their responses to the first two are on ahwatukee.com. Today’s question: What qualifications make you the best candidate to represent LD 18 in the State Senate? Put another way, why should voters pick you?

There’s always more ways to Get Out on our website: www.Ahwatukee.com

I am a true conservative who embraces the Founding Fathers’ principles of “Life, Liberty and the Pursuit of Happiness.” I am pro-life. I believe in the sanctity of human life. I am also pro-veteran. Why? Because as a war veteran, and like many of my fellow veterans, I fought for life as we know it. When it comes to “liberty,” I am pro Second Amendment. I believe the right to own a firearm is a basic right of all citizens. I am also pro markets because free markets and less regulation produce more growth, more jobs and higher standards of living. I will work to bring more business to Arizona. To do that, I favor eliminating the Arizona State Income Tax and replacing it with a consumption fee on all items except basic food and clothing in order to protect those on a fixed income. I want to sponsor carefully drafted legislation to do this, and when we do business will come and you will have more control of your own money.

The “Pursuit of Happiness” comes from two things: Education, which is why I founded two scholarship organizations that have literally helped hundreds of students go to school form our district and across the state. I believe funds need to get to our students and teachers not more bureaucracy. I will work on legislation to help make that happen. The second “Pursuit of Happiness” comes from legal immigration only. I believe, like the Republican platform, that we need to build a wall and create an environment that inspires legal Immigration only. Actions speak louder than words. Service is one of those actions. I have spent a career serving others as an Air Force officer, a Gulf War veteran, a professional pilot, and as a leader in our community and state on many civic and charitably minded projects. I’m running for Arizona State Senate because I love Arizona, the people who live here and because we deserve better. When you chose your doctor, your accountant or your real estate agent don’t you want someone with the best character and credentials to treat and serve you? Shouldn’t the same be the case when choosing your State

Senator? Check out mine at www. TeamSCHMUCK.com. If you contribute, I will match your contribution dollar for dollar because I have skin in the game. I care about you. I will fight for you, not the lobbyists, not the special interest and certainly not an out-of-touch establishment. I’m not a politician; I am a statesman. We are the people, “Government of the people, by the people, and for the people, shall not perish from the earth,” said Abraham Lincoln at Gettysburg where my ancestors fought. I humbly ask for your vote on or before Aug. 30 to bring integrity, service and real leadership to the Arizona Senate in our beloved Legislative District 18. God bless you and God bless Arizona and America.