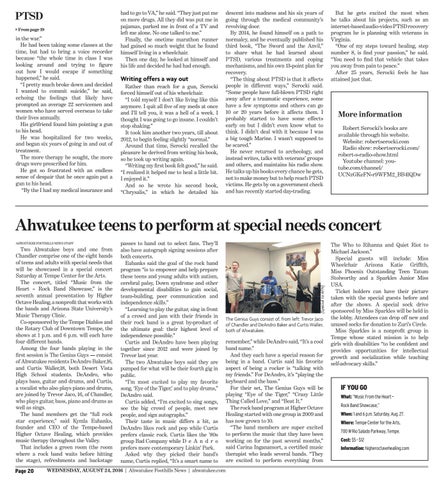 in the war.” He had been taking some classes at the time, but had to bring a voice recorder because “the whole time in class I was looking around and trying to figure out how I would escape if something happened,” he said. “I pretty much broke down and decided I wanted to commit suicide,” he said, echoing the feelings that likely have prompted an average 22 servicemen and women who have served overseas to take their lives annually. His girlfriend found him pointing a gun to his head. He was hospitalized for two weeks, and began six years of going in and out of treatment. The more therapy he sought, the more drugs were prescribed for him. He got so frustrated with an endless sense of despair that he once again put a gun to his head. “By the I had my medical insurance and

had to go to VA,” he said. “They just put me on more drugs. All they did was put me in pajamas, parked me in front of a TV and left me alone. No one talked to me.” Finally, the onetime marathon runner had gained so much weight that he found himself living in a wheelchair. Then one day, he looked at himself and his life and decided he had had enough.

Writing offers a way out Rather than reach for a gun, Serocki forced himself out of his wheelchair. “I told myself I don’t like living like this anymore. I quit all five of my meds at once and I’ll tell you, it was a hell of a week. I thought I was going to go insane. I couldn’t stop shaking.” It took him another two years, till about 2012, to begin feeling slightly “normal.” Around that time, Serocki recalled the pleasure he derived from writing his book, so he took up writing again. “Writing my first book felt good,” he said. “I realized it helped me to heal a little bit. I enjoyed it.” And so he wrote his second book, “Chrysalis,” in which he detailed his

descent into madness and his six years of going through the medical community’s revolving door. By 2014, he found himself on a path to normalcy, and he eventually published his third book, “The Sword and the Anvil,” to share what he had learned about PTSD, various treatments and coping mechanisms, and his own 13-point plan for recovery. “The thing about PTSD is that it affects people in different ways,” Serocki said. “Some people have full-blown PTSD right away after a traumatic experience, some have a few symptoms and others can go 10 or 20 years before it affects them. I probably started to have some effects early on but I didn’t even know what to think. I didn’t deal with it because I was a big tough Marine. I wasn’t supposed to be scared.” He never returned to archeology, and instead writes, talks with veterans’ groups and others, and maintains his radio show. He talks up his books every chance he gets, not to make money but to help reach PTSD victims. He gets by on a government check and has recently started day-trading.

But he gets excited the most when he talks about his projects, such as an internet-based audio-video PTSD recovery program he is planning with veterans in Virginia. “One of my steps toward healing, step number 8, is find your passion,” he said. “You need to find that vehicle that takes you away from pain to peace.” After 25 years, Serocki feels he has attained just that.

Two Ahwatukee boys and one from Chandler comprise one of the eight bands of teens and adults with special needs that will be showcased in a special concert Saturday at Tempe Center for the Arts. The concert, titled “Music from the Heart – Rock Band Showcase,” is the seventh annual presentation by Higher Octave Healing, a nonprofit that works with the bands and Arizona State University’s Music Therapy Clinic. Co-sponsored by the Tempe Diablos and the Rotary Club of Downtown Tempe, the shows at 1 p.m. and 6 p.m. will each have four different bands. Among the four bands playing in the first session is The Genius Guys — consist of Ahwatukee residents DeAndro Baker,16, and Curtis Waller,18, both Desert Vista High School students. DeAndro, who plays bass, guitar and drums, and Curtis, a vocalist who also plays piano and drums, are joined by Trevor Jaco, 16, of Chandler, who plays guitar, bass, piano and drums as well as sings. The band members get the “full rock star experience,” said Kymla Eubanks, founder and CEO of the Tempe-based Higher Octave Healing, which provides music therapy throughout the Valley. That includes a green room (the room where a rock band waits before hitting the stage), refreshments and backstage Page 20

passes to hand out to select fans. They’ll also have autograph signing sessions after both concerts. Eubanks said the goal of the rock band program “is to empower and help prepare these teens and young adults with autism, cerebral palsy, Down syndrome and other developmental disabilities to gain social, team-building, peer communication and independence skills.” “Learning to play the guitar, sing in front of a crowd and jam with their friends in their rock band is a great by-product of the ultimate goal: their highest level of independence possible.” Curtis and DeAndro have been playing together since 2012 and were joined by Trevor last year. The two Ahwatukee boys said they are pumped for what will be their fourth gig in public. “I’m most excited to play my favorite song, ‘Eye of the Tiger,’ and to play drums,” DeAndro said. Curtis added, “I’m excited to sing songs, see the big crowd of people, meet new people, and sign autographs.” Their taste in music differs a bit, as DeAndro likes rock and pop while Curtis prefers classic rock. Curtis likes the '80s group Bad Company while D e A n d r o prefers more contemporary Linkin’ Park. Asked why they picked their band’s name, Curtis replied, “It’s a smart name to

The Genius Guys consist of, from left: Trevor Jaco of Chandler and DeAndro Baker and Curtis Waller, both of Ahwatukee.

remember,” while DeAndro said, “It’s a cool band name.” And they each have a special reason for being in a band. Curtis said his favorite aspect of being a rocker is “talking with my friends.” For DeAndro, it’s “playing the keyboard and the bass.” For their set, The Genius Guys will be playing “Eye of the Tiger,” “Crazy Little Thing Called Love,” and “Beat It.” The rock band program at Higher Octave Healing started with one group in 2009 and has now grown to 10. “The band members are super excited to perform the music that they have been working on for the past several months,” said Carina Inganamort, a certified music therapist who leads several bands. “They are excited to perform everything from

The Who to Rihanna and Quiet Riot to Michael Jackson.” Special guests will include: Miss Wheelchair Arizona Katie Griffith, Miss Phoenix Outstanding Teen Tatum Stolworthy and a Sparkles Junior Miss USA. Ticket holders can have their picture taken with the special guests before and after the shows. A special sock drive sponsored by Miss Sparkles will be held in the lobby. Attendees can drop off new and unused socks for donation to Zuri’s Circle. Miss Sparkles is a nonprofit group in Tempe whose stated mission is to help girls with disabilities “to be confident and provides opportunities for intellectual growth and socialization while teaching self-advocacy skills.”