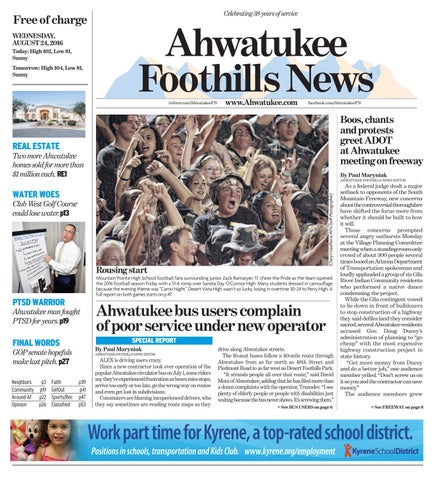 REAL ESTATE Two more Ahwatukee homes sold for more than $1 million each. RE1

Mountain Pointe High School football fans surrounding junior Zack Ramseyer, 17, cheer the Pride as the team opened the 2016 football season Friday with a 51-6 romp over Sandra Day O’Connor High. Many students dressed in camouflage because the evening theme was “Camo Night.” Desert Vista High wasn’t so lucky, losing in overtime 30-24 to Perry High. A full report on both games starts on p.47.

ALEX is driving users crazy. Since a new contractor took over operation of the popular Ahwatukee circulator bus on July 1, some riders say they’ve experienced frustration as buses miss stops, arrive too early or too late, go the wrong way on routes and even get lost in subdivisions. Commuters are blaming inexperienced drivers, who they say sometimes are reading route maps as they

drive along Ahwatukee streets. The 16-seat buses follow a 40-mile route through Ahwatukee from as far north as 48th Street and Piedmont Road to as far west as Desert Foothills Park. “It strands people all over that route,” said David Mota of Ahwatukee, adding that he has filed more than a dozen complaints with the operator, Transdev. “I see plenty of elderly people or people with disabilities just waiting because the bus never shows. It’s screwing them.” &gt;&gt; See BUS USERS on page 6

As a federal judge dealt a major setback to opponents of the South Mountain Freeway, new concerns about the controversial thoroughfare have shifted the focus more from whether it should be built to how it will. Those concerns prompted several angry outbursts Monday at the Village Planning Committee meeting when a standing-room-only crowd of about 300 people several times booed an Arizona Department of Transportation spokesman and loudly applauded a group of six Gila River Indian Community residents who performed a native dance condemning the project. While the Gila contingent vowed to lie down in front of bulldozers to stop construction of a highway they said defiles land they consider sacred, several Ahwatukee residents accused Gov. Doug Ducey’s administration of planning to “go cheap” with the most expensive highway construction project in state history. “Get more money from Ducey and do a better job,” one audience member yelled. “Don’t screw us on it so you and the contractor can save money.” The audience members grew &gt;&gt; See FREEWAY on page 8