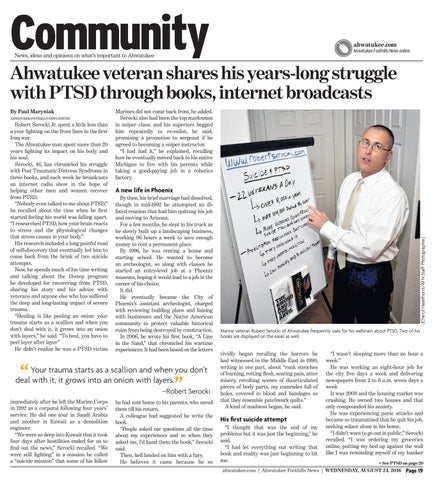 News, ideas and opinions on what’s important to Ahwatukee

Robert Serocki Jr. spent a little less than a year fighting on the front lines in the first Iraq war. The Ahwatukee man spent more than 20 years fighting its impact on his body and his soul. Serocki, 46, has chronicled his struggle with Post Traumatic Distress Syndrome in three books, and each week he broadcasts an internet radio show in the hope of helping other men and women recover from PTSD. “Nobody even talked to me about PTSD,” he recalled about the time when he first started feeling his world was falling apart. “I researched PTSD, how your brain reacts to stress and the physiological changes that stress causes in your body.” His research included a long painful road of self-discovery that eventually led him to come back from the brink of two suicide attempts. Now, he spends much of his time writing and talking about the 13-step program he developed for recovering from PTSD, sharing his story and his advice with veterans and anyone else who has suffered the deep and long-lasting impact of severe trauma. “Healing is like peeling an onion: your trauma starts as a scallion and when you don’t deal with it, it grows into an onion with layers,” he said. “To heal, you have to peel layer after layer.” He didn’t realize he was a PTSD victim

Marines did not come back from, he added. Serocki also had been the top marksman in sniper class, and his superiors begged him repeatedly to re-enlist, he said, promising a promotion to sergeant if he agreed to becoming a sniper instructor. “I had had it,” he explained, recalling how he eventually moved back to his native Michigan to live with his parents while taking a good-paying job in a robotics factory.

A new life in Phoenix By then, his brief marriage had dissolved, though in mid-1992 he attempted an illfated reunion that had him quitting his job and moving to Arizona. For a few months, he slept in his truck as he slowly built up a landscaping business, working 96 hours a week to save enough money to rent a permanent place. By 1996, he was renting a house and starting school. He wanted to become an archeologist, so along with classes he started an entry-level job at a Phoenix museum, hoping it would lead to a job in the career of his choice. It did. He eventually became the City of Phoenix’s assistant archeologist, charged with reviewing building plans and liaising with businesses and the Native American community to protect valuable historical ruins from being destroyed by construction. In 2006, he wrote his first book, “A Line in the Sand,” that chronicled his wartime experiences. It had been based on the letters

Your trauma starts as a scallion and when you don’t “ deal with it, it grows into an onion with layers. ”

immediately after he left the Marine Corps in 1992 as a corporal following four years’ service. He did one tour in Saudi Arabia and another in Kuwait as a demolition engineer. “We were so deep into Kuwait that it took four days after hostilities ended for us to find out the news,” Serocki recalled. “We were still fighting” in a mission he called a “suicide mission” that some of his fellow

he had sent home to his parents, who saved them till his return. A colleague had suggested he write the book. “People asked me questions all the time about my experiences and so when they asked me, I’d hand them the book,” Serocki said. Then, hell landed on him with a fury. He believes it came because he so

Marine veteran Robert Serocki of Ahwatukee frequently uses for his webinars about PTSD. Two of his books are displayed on the easel as well.

vividly began recalling the horrors he had witnessed in the Middle East in 1990, writing in one part, about “rank stenches of burning, rotting flesh, searing pain, utter misery, revolting scenes of disarticulated pieces of body parts, my comrades full of holes, covered in blood and bandages so that they resemble patchwork quilts.” A kind of madness began, he said.

His first suicide attempt “I thought that was the end of my problems but it was just the beginning,” he said. “I had let everything out writing that book and reality was just beginning to hit me.

“I wasn’t sleeping more than an hour a week.” He was working an eight-hour job for the city five days a week and delivering newspapers from 2 to 6 a.m. seven days a week It was 2008 and the housing market was crashing. He owned two houses and that only compounded his anxiety. He was experiencing panic attacks and became so traumatized that he quit his job, seeking solace alone in his home. “I didn’t want to go out in public,” Serocki recalled. “I was ordering my groceries online, putting my bed up against the wall like I was reminding myself of my bunker >> See PTSD on page 20