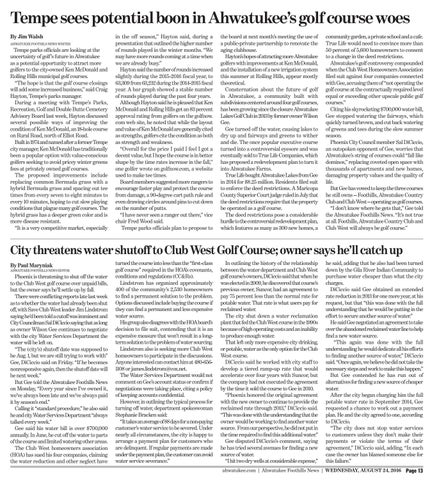 Tempe parks officials are looking at the uncertainty of golf’s future in Ahwatukee as a potential opportunity to attract more golfers to the city-owned Ken McDonald and Rolling Hills municipal golf courses. “The hope is that the golf course closings will add some increased business,’’ said Craig Hayton, Tempe’s parks manager. During a meeting with Tempe’s Parks, Recreation, Golf and Double Butte Cemetery Advisory Board last week, Hayton discussed several possible ways of improving the condition of Ken McDonald, an 18-hole course on Rural Road, north of Elliot Road. Built in 1974 and named after a former Tempe city manager, Ken McDonald has traditionally been a popular option with value-conscious golfers seeking to avoid pricey winter greens fees at privately owned golf courses. The proposed improvements include replacing common Bermuda grass with a hybrid Bermuda grass and spacing out tee times from every seven to eight minutes to every 10 minutes, hoping to cut slow playing conditions that plague many golf courses. The hybrid grass has a deeper green color and is more disease resistant. “It is a very competitive market, especially

in the off season,’’ Hayton said, during a presentation that outlined the higher number of rounds played in the winter months. “We may have more rounds coming at a time when we are already busy.’’ Hayton said the number of rounds increased slightly during the 2015-2016 fiscal year, to 63,309 from 63,232 during the 2014-2015 fiscal year. A bar graph showed a stable number of rounds played during the past four years. Although Hayton said he is pleased that Ken McDonald and Rolling Hills get an 83 percent approval rating from golfers on the golfnow. com web site, he noted that while the layout and value of Ken McDonald are generally cited as strengths, golfers cite the condition as both as strength and weakness. “Overall for the price I paid I feel I got a decent value, but I hope the course is in better shape by the time rates increase in the fall,’’ one golfer wrote on golfnow.com, a website used to make tee times. Board members suggested more rangers to encourage faster play and protect the course from damage, a 90-degree cart path rule and even drawing circles around pins to cut down on the number of putts. “I have never seen a ranger out there,’’ vice chair Fred Wood said. Tempe parks officials plan to propose to

the board at next month’s meeting the use of a public-private partnership to renovate the aging clubhouse. Hayton’s hopes of attracting more Ahwatukee golfers with improvements at Ken McDonald, and the installation of a new irrigation system this summer at Rolling Hills, appear mostly theoretical. Consternation about the future of golf in Ahwatukee, a community built with subdivisions centered around four golf courses, has been growing since the closure Ahwatukee Lakes Golf Club in 2013 by former owner Wilson Gee. Gee turned off the water, causing lakes to dry up and fairways and greens to wither and die. The once popular executive course turned into a controversial eyesore and was eventually sold to True Life Companies, which has proposed a redevelopment plan to turn it into Ahwatukee Farms. True Life bought Ahwatukee Lakes from Gee in 2014 for $8.25 million. Residents filed suit to enforce the deed restrictions. A Maricopa County Superior Court judge ruled in July that the deed restrictions require that the property be operated as a golf course. The deed restrictions pose a considerable hurdle to the controversial redevelopment plan, which features as many as 300 new homes, a

community garden, a private school and a cafe. True Life would need to convince more than 50 percent of 5,600 homeowners to consent to a change in the deed restrictions. Ahwatukee’s golf controversy compounded when the Club West Homeowners Association filed suit against four companies connected with Gee, accusing them of “not operating the golf course at the contractually required level equal or exceeding other upscale public golf courses.’’ Citing his skyrocketing $700,000 water bill, Gee stopped watering the fairways, which quickly turned brown, and cut back watering of greens and tees during the slow summer season. Phoenix City Council member Sal DiCiccio, an outspoken opponent of Gee, worries that Ahwatukee’s string of courses could “fall like dominos,’’ replacing coveted open space with thousands of apartments and new homes, damaging property values and the quality of life. But Gee has vowed to keep the three courses he still owns -- Foothills, Ahwatukee Country Club and Club West -- operating as golf courses. “I don’t know where he gets that,’’ Gee told the Ahwatukee Foothills News. “It’s not true at all. Foothills, Ahwatukee Country Club and Club West will always be golf course.’’

Phoenix is threatening to shut off the water to the Club West golf course over unpaid bills, but the owner says he’ll settle up by fall. There were conflicting reports late last week as to whether the water had already been shut off, with Save Club West leader Jim Lindstrom saying he’d been told a cutoff was imminent and City Councilman Sal DiCiccio saying that as long as owner Wilson Gee continues to negotiate with the city Water Services Department the water will be left on. “The (city’s) shutoff date was supposed to be Aug. 1, but we are still trying to work with” Gee, DiCiccio said on Friday. “If he becomes nonresponsive again, then the shutoff date will be next week.” But Gee told the Ahwatukee Foothills News on Monday, “Every year since I’ve owned it, we’ve always been late and we’ve always paid it by season’s end.” Calling it “standard procedure,” he also said he and city Water Services Department “always talked every week.” Gee said his water bill is over $700,000 annually. In June, he cut off the water to parts of the course and limited watering other areas. The Club West homeowners association (HOA) has sued his four companies, claiming the water reduction and other neglect have

turned the course into less than the “first-class golf course” required in the HOA’s covenants, conditions and regulations (CC&Rs). Lindstrom has organized approximately 400 of the community’s 2,530 homeowners to find a permanent solution to the problem. Options discussed include buying the course if they can find a permanent and less expensive water source. His group also disagrees with the HOA board’s decision to file suit, contending that it is an expensive measure that won’t result in a longterm solution to the problem of water sourcing. Lindstrom also is seeking more Club West homeowners to participate in the discussions. Anyone interested can contact him at 480-6561108 or james.lindstrom@cox.net. The Water Services Department would not comment on Gee’s account status or confirm if negotiations were taking place, citing a policy of keeping accounts confidential. However, in outlining the typical process for turning off water, department spokeswoman Stephanie Bracken said: “It takes an average of 88 days for a non-paying customer’s water service to be severed. Under nearly all circumstances, the city is happy to arrange a payment plan for customers who are delinquent. If regular payments are made under the payment plan, the customer can avoid water service severance.”

In outlining the history of the relationship between the water department and Club West golf course’s owners, DiCiccio said that when he was elected in 2009, he discovered that course’s previous owner, Suncor, had an agreement to pay 75 percent less than the normal rate for potable water. That rate is what users pay for reclaimed water. The city shut down a water reclamation plant that fed the Club West course in the 1990s because of high operating costs and an inability to produce enough water. That left only more expensive city drinking, or potable, water as the only option for the Club West course. DiCiccio said he worked with city staff to develop a tiered ramp-up rate that would accelerate over four years with Suncor, but the company had not executed the agreement by the time it sold the course to Gee in 2010. “Phoenix honored the original agreement with the new owner to continue to provide the reclaimed rate through 2013,” DiCiccio said. “This was done with the understanding that the owner would be working to find another water source. From our perspective, he did not put in the time required to find this additional water.” Gee disputed DiCiccio’s comment, saying he has tried several avenues for finding a new source of water. “I hit two dry wells at considerable expense,”

he said, adding that he also had been turned down by the Gila River Indian Community to purchase water cheaper than what the city charges. DiCiccio said Gee obtained an extended rate reduction in 2013 for one more year, at his request, but that “this was done with the full understanding that he would be putting in the effort to secure another source of water.” He said Gee negotiated an agreement to take over the abandoned reclaimed water line to help find a new water source. “This again was done with the full understanding he would dedicate all his efforts to finding another source of water,” DiCiccio said. “Once again, we believe he did not take the necessary steps and work to make this happen.” But Gee contended he has run out of alternatives for finding a new source of cheaper water. After the city began charging him the full potable water rate in September 2014, Gee requested a chance to work out a payment plan. He and the city agreed to one, according to DiCiccio. “The city does not stop water services to customers unless they don’t make their payments or violate the terms of their agreement,” DiCiccio said, adding, “In each case the owner has blamed someone else for this failure.”