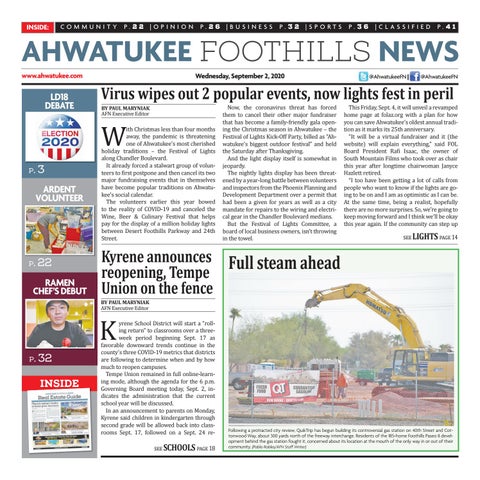 ith Christmas less than four months away, the pandemic is threatening one of Ahwatukee’s most cherished holiday traditions – the Festival of Lights along Chandler Boulevard. It already forced a stalwart group of volunteers to �irst postpone and then cancel its two major fundraising events that in themselves have become popular traditions on Ahwatukee’s social calendar. The volunteers earlier this year bowed to the reality of COVID-19 and canceled the Wine, Beer & Culinary Festival that helps pay for the display of a million holiday lights between Desert Foothills Parkway and 24th Street.

Now, the coronavirus threat has forced them to cancel their other major fundraiser that has become a family-friendly gala opening the Christmas season in Ahwatukee – the Festival of Lights Kick-Off Party, billed as “Ahwatukee’s biggest outdoor festival” and held the Saturday after Thanksgiving. And the light display itself is somewhat in jeopardy. The nightly lights display has been threatened by a year-long battle between volunteers and inspectors from the Phoenix Planning and Development Department over a permit that had been a given for years as well as a city mandate for repairs to the wiring and electrical gear in the Chandler Boulevard medians. But the Festival of Lights Committee, a board of local business owners, isn’t throwing in the towel.

This Friday, Sept. 4, it will unveil a revamped home page at folaz.org with a plan for how you can save Ahwatukee’s oldest annual tradition as it marks its 25th anniversary. “It will be a virtual fundraiser and it (the website) will explain everything,” said FOL Board President Ra�i Isaac, the owner of South Mountain Films who took over as chair this year after longtime chairwoman Janyce Hazlett retired. “I too have been getting a lot of calls from people who want to know if the lights are going to be on and I am as optimistic as I can be. At the same time, being a realist, hopefully there are no more surprises. So, we’re going to keep moving forward and I think we’ll be okay this year again. If the community can step up

yrene School District will start a “rolling return” to classrooms over a threeweek period beginning Sept. 17 as favorable downward trends continue in the county’s three COVID-19 metrics that districts are following to determine when and by how much to reopen campuses. Tempe Union remained in full online-learning mode, although the agenda for the 6 p.m. Governing Board meeting today, Sept. 2, indicates the administration that the current school year will be discussed. In an announcement to parents on Monday, Kyrene said children in kindergarten through second grade will be allowed back into classrooms Sept. 17, followed on a Sept. 24 re-

Following a protracted city review, QuikTrip has begun building its controversial gas station on 40th Street and Cottonwood Way, about 300 yards north of the freeway interchange. Residents of the 185-home Foothills Paseo II development behind the gas station fought it, concerned about its location at the mouth of the only way in or out of their community. (Pablo Robles/AFN Staff Writer)