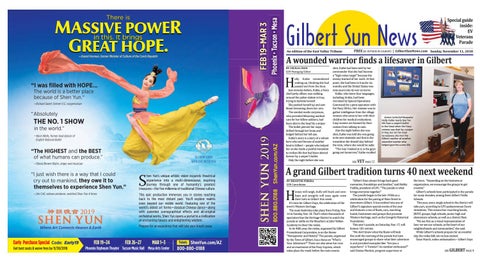 hen Yun’s unique artistic vision expands theatrical experience into a multi-dimensional, inspiring journey through one of humanity’s greatest treasures—the five millennia of traditional Chinese culture. This epic production immerses you in stories reaching back to the most distant past. You’ll explore realms even beyond our visible world. Featuring one of the world’s oldest art forms—classical Chinese dance—along with patented scenographical effects and all-original orchestral works, Shen Yun opens a portal to a civilization of enchanting beauty and enlightening wisdom.

Prepare for an experience that will take your breath away.

—Daniel Herman, former Minister of Culture of the Czech Republic

Special guide inside: EV Veterans Parade An edition of the East Valley Tribune

olly Katke remembered waking up, thinking she had passed out from the heat. Just minutes before, Katke, a Navy chief petty officer, was walking around the police station in Iraq trying to hydrate herself. She pushed herself up and saw blood streaming down her arm. The combat medic corpsman, who provided lifesaving medical care for her fellow soldiers, had been shot in the head by a sniper. The bullet pierced her nape, drilled through her brain and lodged behind her left eye. Katke’s story is a story of a valiant hero who met heroes of another kind in Gilbert – people who helped her as she made a painful transition to civilian life that had been altered forever by a sniper’s bullet. Only the night before she was

shot, Katke had been told by her commander that she had become a “high-value target” because the enemy learned of her work. At that point, she had been in Iraq for six months and the United States was nine years into its war on terror. Katke, who knew four languages, including Arabic, had been recruited by Special Operations Command for a joint operation with the Navy SEALs. Her mission was to gather intelligence from the village women who came to her with their children for medical evaluations. Iraqi women are banned by their custom from talking to men. Also the night before she was shot, Katke was told she was going to be sent stateside and that in the meantime she should stay behind the wire, where she would be safer. “The way I looked at it, is the guys going out tomorrow,” Katke recalled

Holly Katke nearly lost her life from a sniper&#39;s bullet in the head when the Navy veteran was shot by a sniper in Iraq, but on her road to recovery she met the Gilbert mother of another wounded warrior who helped give her a new life.

orses will neigh, bulls will buck and cowboys and cowgirls will once again wave their hats in Gilbert this week. It’s time for Gilbert Days, the celebration of the town’s Western heritage. The main festivities take place from Friday, Nov. 16 to Sunday, Nov. 18. That’s when thousands of spectators line the Heritage District to watch the parade or settle on the bleachers at John Volken Academy to cheer the rodeo. In its 40th year, the rodeo, organized by Gilbert Promotional Corporation, is on the theme “Horsepower and History.” The parade, organized by the Town of Gilbert, has a focus on “What’s Your Adventure?” There are also some fun runs and an enactment of the Pony Express, which takes place the week before the main events.

“Gilbert Days always brings back good memories, friendships and families,” said Bobby Padilla, president of GPC. “The parade is what brings everyone together.” The parade began in the late 1950s as a celebration for the paving of Main Street in downtown Gilbert. It has evolved into one of Gilbert’s signature special events of the year and features a mix of floats, cars, marching bands, businesses and groups that promote Western heritage, such as the Cowgirls Historical Foundation. This year’s parade, on Saturday, Nov. 17, will feature 101 entries. “We don’t know what the floats will look like until the morning of the parade but have encouraged groups to share what their adventure is and provided examples like: “Are you a superhero? A Traveler? An outdoor enthusiast?” said Denise Merdon, program supervisor at

the town. “Depending on the business or organization, we encourage the groups to get creative.” Gilbert’s schools have participated in the parade for many decades, among them Gilbert Public Schools. This year, every single school in the district will take part, according to GPS spokeswoman Dawn Antestenis. This means four marching bands, JROTC groups, high schools, junior high and elementary schools, as well as a district float. “We see this as a visual representation of how we see our schools, as the heart of our neighborhoods and communities,” she said. While Gilbert’s schools prepare for an eventful day, the rodeo folk are no less excited. Since March, rodeo ambassadors – Gilbert Days