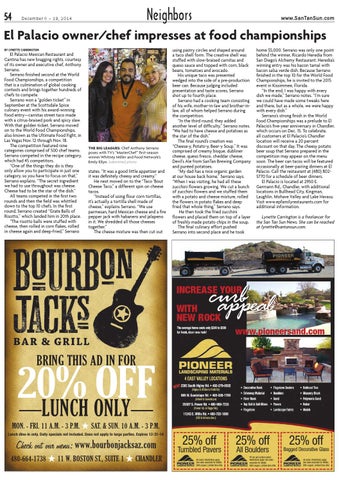 El Palacio Mexican Restaurant and Cantina has new bragging rights, courtesy of its owner and executive chef, Anthony Serrano. Serrano ﬁnished second at the World Food Championships, a competition that is a culmination of global cooking contests and brings together hundreds of chefs to compete. Serrano won a “golden ticket” in September at the Scottsdale Spice culinary event with his award-winning food entry—carnitas street taco made with a citrus-braised pork and spicy slaw. With that golden ticket, Serrano moved on to the World Food Championships, also known as the Ultimate Food Fight, in Las Vegas Nov. 12 through Nov. 18. The competition featured nine categories comprised of 500 chef teams. Serrano competed in the recipe category, which had 45 competitors. “One of the things they do is they only allow you to participate in just one category, so you have to focus on that,” Serrano explains. “The secret ingredient we had to use throughout was cheese. Cheese had to be the star of the dish.” All teams competed in the ﬁrst two rounds and then the ﬁeld was whittled down to the top 10 chefs. In the ﬁrst round, Serrano created “Grate Balls of Risotto,” which landed him in 20th place. “The risotto balls were stuffed with cheese, then rolled in corn ﬂakes, rolled in cheese again and deep-fried,” Serrano

states. “It was a good little appetizer and it was deﬁnitely cheesy and creamy.” He next moved on to the “Taco ‘Bout Cheese Taco,” a different spin on cheese tacos. “Instead of using ﬂour corn tortillas, it’s actually a tortilla shell made of cheese,” explains Serrano. “We use parmesan, hard Mexican cheese and a ﬁre pepper jack with habanero and jalapeno in it. We shredded all those cheeses together.” The cheese mixture was then cut out

using pastry circles and shaped around a taco shell form. The creative shell was stuffed with slow-braised carnitas and queso sauce and topped with corn, black beans, tomatoes and avocado. His unique taco was presented wedged into the side of a pre-production beer can. Because judging included presentation and taste scores, Serrano shot up to fourth place. Serrano had a cooking team consisting of his wife, mother-in-law and brother-inlaw, all of whom helped Serrano during the competition. “In the third round, they added another level of difﬁculty,” Serrano notes. “We had to have cheese and potatoes as the star of the dish.” The ﬁnal round’s creation was “Cheese-y, Potato-y, Beer-y Soup.” It was comprised of creamy bisque, dubliner cheese, queso fresco, cheddar cheese, Devil’s Ale from SanTan Brewing Company and puréed potatoes. “My dad has a nice organic garden at our house back home,” Serrano says. “When I was visiting, he had all these zucchini ﬂowers growing. We cut a bunch of zucchini ﬂowers and we stuffed them with a potato and cheese mixture, rolled the ﬂowers in potato ﬂakes and deep fried that whole thing,” Serrano says. He then took the fried zucchini ﬂowers and placed them on top of a layer of freshly made potato chips in the soup. The ﬁnal culinary effort pushed Serrano into second place and he took

home $5,000. Serrano was only one point behind the winner, Ricardo Heredia from San Diego’s Alchemy Restaurant. Heredia’s winning entry was his bacon tamal with bacon salsa verde dish. Because Serrano ﬁnished in the top 10 for the World Food Championships, he is invited to the 2015 event in Kissimmee, Florida. “In the end, I was happy with every dish we made,” Serrano notes. “I’m sure we could have made some tweaks here and there, but as a whole, we were happy with every dish.” Serrano’s strong ﬁnish in the World Food Championships was a prelude to El Palacio’s ﬁve-year anniversary in Chandler, which occurs on Dec. 15. To celebrate, all customers at El Palacio’s Chandler location will receive a 20 percent discount on that day. The cheesy potato beer soup that Serrano prepared in the competition may appear on the menu soon. The beer can tacos will be featured occasionally at beer-pairing dinners at El Palacio. Call the restaurant at (480) 8025770 for a schedule of beer dinners. El Palacio is located at 2950 E. Germann Rd., Chandler, with additional locations in Bullhead City, Kingman, Laughlin, Mohave Valley and Lake Havasu. Visit www.epfamilyrestaurants.com for additional information. Lynette Carrington is a freelancer for the San Tan Sun News. She can be reached at lynette@santansun.com.

INCREASE YOUR WITH NEW ROCK

BRING THIS AD IN FOR