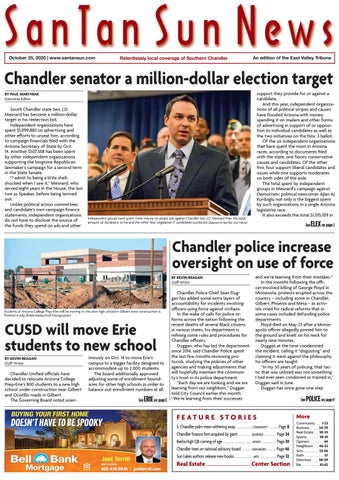 Chandler senator a million-dollar election target support they provide for or against a candidate. And this year, independent organizations of all political stripes and causes have flooded Arizona with money, spending it on mailers and other forms of advertising in support of or opposition to individual candidates as well as the two initiatives on the Nov. 3 ballot. Of the six independent organizations that have spent the most in Arizona races, according to documents filed with the state, one favors conservative causes and candidates. Of the other five, four support liberal candidates and issues while one supports moderates on both sides of the aisle. The total spent by independent groups in Mesnard’s campaign against Democratic political newcomer Ajlan AJ Kurdoglu not only is the biggest spent by such organizations in a single Arizona legislative race. It also exceeds the total $1,015,109 in

South Chandler state Sen. J.D. Mesnard has become a million-dollar target in his reelection bid. Independent organizations have spent $1,099,882 on advertising and other efforts to unseat him, according to campaign financials filed with the Arizona Secretary of State by Oct. 14. Another $507,558 has been spent by other independent organizations supporting the longtime Republican lawmaker’s campaign for a second term in the State Senate. “I admit to being a little shellshocked when I saw it,” Mesnard, who served eight years in the House, the last two as Speaker, before being termed out. Unlike political action committees and candidate’s own campaign finance statements, independent organizations do not have to disclose the source of the funds they spend on ads and other

Independent groups have spent more money on attack ads against Chandler Sen. J.D. Mesnard than the total amount of donations to his and the other four Legislative 17 candidates combined. (Special to SanTan Sun News)

Chandler Police Chief Sean Duggan has added some extra layers of accountability for incidents involving officers using force against civilians. Students at Arizona College Prep-Erie will be moving to this enw high school in Gilbert once construction is In the wake of calls for police refinished in July. (Pablo Robles/Staff Photographer) forms across the nation following the recent deaths of several Black citizens in various states, his department is refining some rules and procedures for Chandler officers. Duggan, who has led the department since 2014, said Chandler Police spent the last few months reviewing proimously on Oct. 14 to move Erie’s BY KEVIN REAGAN tocols, studying the policies of other campus to a bigger facility designed to Staff Writer agencies and making adjustments that accommodate up to 2,000 students. will hopefully maintain the communiThe board additionally approved Chandler Unified officials have ty’s trust in its police department. adjusting some of enrollment bounddecided to relocate Arizona College “Each day we are looking and we are aries for other high schools in order to Prep-Erie’s 800 students to a new high learning from our neighbors,” Duggan school under construction near Gilbert balance out enrollment numbers at all told City Council earlier this month. and Ocotillo roads in Gilbert. “We’re learning from their successes See on page 3 The Governing Board voted unan-

and we’re learning from their mistakes.” In the months following the officer-involved killing of George Floyd in Minnesota, protests erupted across the country – including some in Chandler, Gilbert, Phoenix and Mesa – as activists cried for radical reforms that in some cases included defunding police departments. Floyd died on May 25 after a Minneapolis officer allegedly pinned him to the ground and knelt on his neck for nearly nine minutes. Duggan at the time condemned the incident, calling it “disgusting” and claiming it went against the philosophy his officers are taught. “In my 30 years of policing, that tactic that was utilized was not something I had ever seen condoned or trained in,” Duggan said in June. Duggan has since gone one step

DOESN’T HAVE TO BE SPOOKY