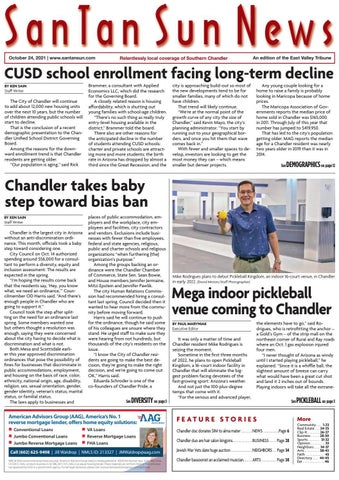 The City of Chandler will continue to add about 12,000 new housing units over the next 10 years, but the number of children attending public schools will start to decline. That is the conclusion of a recent demographic presentation to the Chandler Unified School District Governing Board. Among the reasons for the downward enrollment trend is that Chandler residents are getting older. “Our population is aging,” said Rick

Brammer, a consultant with Applied Economics LLC, which did the research for the Governing Board. A closely related reason is housing affordability, which is shutting out young families with school-age children. “There’s no such thing as really truly entry-level housing available in the district,” Brammer told the board. There also are other reasons for the anticipated decline in the number of students attending CUSD schools: charter and private schools are attracting more and more students; the birth rate in Arizona has dropped by almost a third since the Great Recession; and the

city is approaching build-out so most of the new developments tend to be for smaller families, many of which do not have children. That trend will likely continue. “We’re at the normal point of the growth curve of any city the size of Chandler,” said Kevin Mayo, the city’s planning administrator. “You start by running out to your geographical borders, and once you hit them that wave comes back in.” With fewer and smaller spaces to develop, investors are looking to get the most money they can – which means smaller but denser projects.

Any young couple looking for a home to raise a family is probably looking in Maricopa because of home prices. The Maricopa Association of Governments reports the median price of home sold in Chandler was $165,000 in 2011. Through July of this year that number has jumped to $419,950. That has led to the city’s population getting older. MAG reports the median age for a Chandler resident was nearly two years older in 2019 than it was in 2014. See

Chandler is the largest city in Arizona without an anti-discrimination ordinance. This month, officials took a baby step toward considering one. City Council on Oct. 14 authorized spending around $56,000 for a consultant to perform a diversity, equity and inclusion assessment. The results are expected in the spring. “I’m hoping the results come back that the residents say, ‘Hey, you know what, we need an ordinance,’” Councilmember OD Harris said. “And there’s enough people in Chandler who are going to support it.” Council took the step after splitting on the need for an ordinance last spring. Some members wanted one but others thought a resolution was enough, saying they were concerned about the city having to decide what is discrimination and what is not. Both Mesa and Scottsdale earlier this year approved discrimination ordinances that pose the possibility of fines for businesses that discriminate in public accommodations, employment, and housing on the basis of race, color, ethnicity, national origin, age, disability, religion, sex, sexual orientation, gender, gender identity, veteran’s status, marital status, or familial status. The laws apply to businesses and

places of public accommodation, employers and the workplace, city employees and facilities, city contractors and vendors. Exclusions include businesses with fewer than five employees, federal and state agencies, religious, public and charter schools and religious organizations “when furthering (the) organization’s purpose.” Among the groups backing an ordinance were the Chandler Chamber of Commerce, State Sen. Sean Bowie, and House members Jennifer Jermaine, Mitzi Epstein and Jennifer Pawlik. The city Human Relations Commission had recommended hiring a consultant last spring. Council decided then it wanted to hear more from the community before moving forward. Harris said he will continue to push for the ordinance, though he said some of his colleagues are unsure where they stand. He urged staff to make sure they were hearing from not hundreds, but thousands of the city’s residents on the issue. “I know the City of Chandler residents are going to make the best decision, they’re going to make the right decision, and we’re going to come out OK,” Harris said. Eduarda Schroder is one of the co-founders of Chandler Pride, a See

It was only a matter of time and Chandler resident Mike Rodrigues is seizing the moment. Sometime in the first three months of 2022, he plans to open Pickleball Kingdom, a 16-court indoor facility in Chandler that will eliminate the biggest problem facing devotees of the fast-growing sport: Arizona’s weather. And not just the 100-plus-degree temps that come with it. “For the serious and advanced player,

the elements have to go,” said Rodrigues, who is retrofitting the anchor – a Gold’s Gym – of the strip mall on the northeast corner of Rural and Ray roads where an Oct. 1 gas explosion injured four men. “I never thought of Arizona as windy until I started playing pickleball,” he explained. “Since it is a whiffle ball, the slightest amount of breeze can carry what would have been a great cut shot and land it 2 inches out of bounds. Playing indoors will take all the extrane-