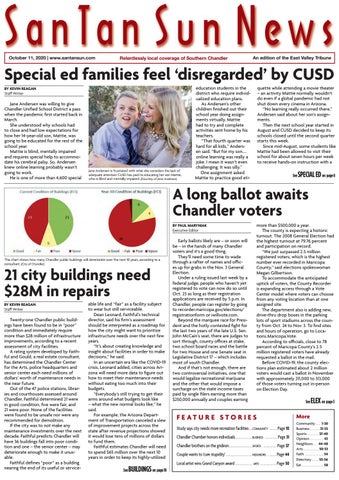 Jane Andersen was willing to give Chandler Unified School District a pass when the pandemic first started back in March. She understood why schools had to close and had low expectations for how her 14-year-old son, Mattie, was going to be educated for the rest of the school year. Mattie is blind, mentally impaired and requires special help to accommodate his cerebral palsy. So, Andersen knew online learning probably wasn’t going to work. He is one of more than 4,600 special

Jane Andersen is frustrated with what she considers the lack of adequate attention CUSD has paid to educating her son Mattie, who is Blind and mentally impaired. (Courtesy of Jane Andersen)

quette while attending a movie theater – an activity Mattie normally wouldn’t do even if a global pandemic had not shut down every cinema in Arizona. “No learning really occurred there,” Andersen said about her son’s assignments. Then the next school year started in August and CUSD decided to keep its schools closed until the second quarter starts this week. Since mid-August, some students like Mattie had been allowed to visit their school for about seven hours per week to receive hands-on instruction with a

education students in the district who require individualized education plans. As Andersen’s other children finished out their school year doing assignments virtually, Mattie had to try and complete activities sent home by his teachers. “That fourth quarter was hard for all kids,” Andersen said. “But for my son.... online learning was really a joke. I mean it wasn’t even challenging. It was silly.” One assignment asked Mattie to practice good eti-

This chart shows how many Chandler public buildings will deteriorate over the next 10 years, according to a consultant. (City of Chandler)

Twenty-one Chandler public buildings have been found to be in “poor” condition and immediately require more than $28 million of infrastructure improvements, according to a recent assessment of city facilities. A rating system developed by Faithful and Gould, a real estate consultant, has determined the Chandler Center for the Arts, police headquarters and senior center each need millions of dollars’ worth of maintenance needs in the near future. Out of the 47 police stations, libraries and courthouses assessed around Chandler, Faithful determined 21 were in good condition, five were fair, and 21 were poor. None of the facilities were found to be unsafe nor were any recommended for demolition. If the city was to not make any maintenance investments over the next decade, Faithful predicts Chandler will have 36 buildings fall into poor condition and one – the senior center – may deteriorate enough to make it unusable. Faithful defines “poor” as a building nearing the end of its useful or service-

able life and “fair” as a facility subject to wear but still serviceable. Dean Leonard, Faithful’s technical director, said his firm’s assessment should be interpreted as a roadmap for how the city might want to prioritize infrastructure needs over the next few years. “It’s about creating knowledge and insight about facilities in order to make decisions,” he said. In an uncertain era like the COVID-19 crisis, Leonard added, cities across Arizona will need more data to figure out how to meet their maintenance needs without eating too much into their budgets. “Everybody’s still trying to get their arms around what budgets look like – what the new normal looks like,” he said. For example, the Arizona Department of Transportation canceled a slew of improvement projects across the state after revenue projections showed it would lose tens of millions of dollars to fund them. Faithful estimates Chandler will need to spend $65 million over the next 10 years in order to keep its highly-utilized See

Early ballots likely are – or soon will be – in the hands of many Chandler voters and it’s a good thing. They’ll need some time to wade through a rafter of names and offices up for grabs in the Nov. 3 General Election. Under a ruling issued last week by a federal judge, people who haven’t yet registered to vote can now do so until Oct. 23 as long as their registration applications are received by 5 p.m. In Chandler, people can register by going to recorder.maricopa.gov/elections/ registrationform or iwillvote.com. Beyond the marquee race for President and the hotly contested fight for the last two years of the late U.S. Sen. John McCain’s seat, there are judges to sort through, county offices at stake, two school board races and the battle for two House and one Senate seat in Legislative District 17 – which includes most of south Chandler. And if that’s not enough, there are two controversial initiatives, one that would legalize recreational marijuana and the other that would impose a surcharge on the state income taxes paid by single filers earning more than $250,000 annually and couples earning

more than $500,000 a year. The county is expecting a historic turnout. The 2008 General Election had the highest turnout at 79.76 percent and participation on record. “We just surpassed 2.5 million registered voters, which is the highest number ever recorded in Maricopa County,” said elections spokeswoman Megan Gilbertson. To accommodate the anticipated uptick of voters, the County Recorder is expanding access through a Vote Center model where voters can choose from any voting location than at one assigned site. The department also is adding new, drive-thru drop boxes in the parking lots of sport stadiums across the county from Oct. 24 to Nov. 3. To find sites and hours of operation, go to Locations.Maricopa.Vote. According to officials, close to 78 percent of Maricopa County’s 2.5 million registered voters have already requested a ballot in the mail. Before COVID-19, the county elections plan estimated about 2 million voters would cast a ballot in November with approximately 211,000 to 313,000 of those voters turning out in-person on Election Day.