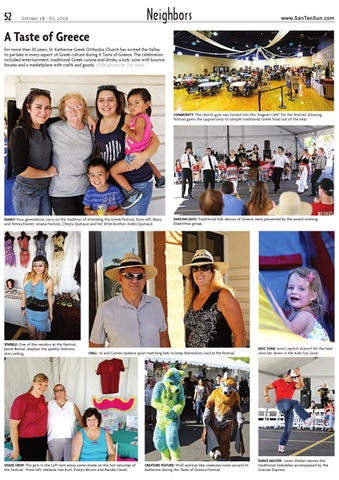 A Taste of Greece For more than 30 years, St. Katherine Greek Orthodox Church has invited the Valley to partake in every aspect of Greek culture during A Taste of Greece. The celebration included entertainment, traditional Greek cuisine and drinks, a kids’ zone with bounce houses and a marketplace with crafts and goods. STSN photos by Tim Sealy

COMMUNITY: The church gym was turned into the “Aegean Cafe” for the festival, allowing festival goers the opportunity to sample traditional Greek food out of the heat.

SPARKLE: One of the vendors at the Festival, Jamie Bernal, displays the sparkly fashions she’s selling.

CHILL: Al and Connie Aydeniz sport matching hats to keep themselves cool at the festival.

SHADE CREW: The girls in the Lyft tent enjoy some shade on the hot Saturday of the festival. From left, Melanie Van Kort, Evelyn Brown and Randie Cesiel.

KIDS’ ZONE: Averi Leptich doesn’t let the heat slow her down in the Kids Fun Zone.