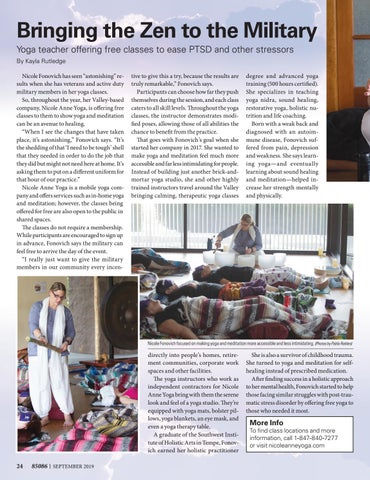 Bringing the Zen to the Military Yoga teacher offering free classes to ease PTSD and other stressors By Kayla Rutledge Nicole Fonovich has seen “astonishing” results when she has veterans and active duty military members in her yoga classes. So, throughout the year, her Valley-based company, Nicole Anne Yoga, is offering free classes to them to show yoga and meditation can be an avenue to healing. “When I see the changes that have taken place, it’s astonishing,” Fonovich says. “It’s the shedding of that ‘I need to be tough’ shell that they needed in order to do the job that they did but might not need here at home. It’s asking them to put on a different uniform for that hour of our practice.” Nicole Anne Yoga is a mobile yoga company and offers services such as in-home yoga and meditation; however, the classes being offered for free are also open to the public in shared spaces. The classes do not require a membership. While participants are encouraged to sign up in advance, Fonovich says the military can feel free to arrive the day of the event. “I really just want to give the military members in our community every incen-

tive to give this a try, because the results are truly remarkable,” Fonovich says. Participants can choose how far they push themselves during the session, and each class caters to all skill levels. Throughout the yoga classes, the instructor demonstrates modified poses, allowing those of all abilities the chance to benefit from the practice. That goes with Fonovich’s goal when she started her company in 2017. She wanted to make yoga and meditation feel much more accessible and far less intimidating for people. Instead of building just another brick-andmortar yoga studio, she and other highly trained instructors travel around the Valley bringing calming, therapeutic yoga classes

directly into people’s homes, retirement communities, corporate work spaces and other facilities. The yoga instructors who work as independent contractors for Nicole Anne Yoga bring with them the serene look and feel of a yoga studio. They’re equipped with yoga mats, bolster pillows, yoga blankets, an eye mask, and even a yoga therapy table. A graduate of the Southwest Institute of Holistic Arts in Tempe, Fonovich earned her holistic practitioner

She is also a survivor of childhood trauma. She turned to yoga and meditation for selfhealing instead of prescribed medication. After finding success in a holistic approach to her mental health, Fonovich started to help those facing similar struggles with post-traumatic stress disorder by offering free yoga to those who needed it most.