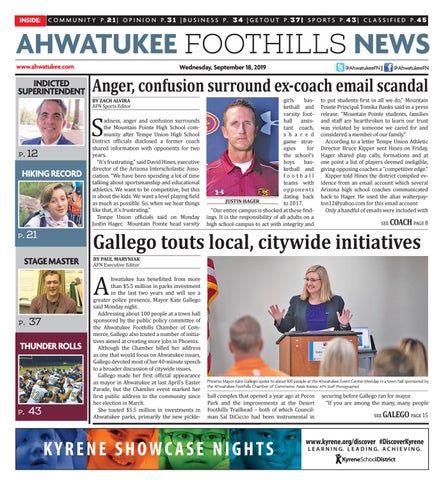 adness, anger and confusion surrounds the Mountain Pointe High School community after Tempe Union High School District officials disclosed a former coach shared information with opponents for two years. “It’s frustrating,” said David Hines, executive director of the Arizona Interscholastic Association. “We have been spending a lot of time talking about sportsmanship and educational athletics. We want to be competitive, but this is about the kids. We want a level playing field as much as possible. So, when we hear things like that, it’s frustrating.” Tempe Union officials said on Monday Justin Hager, Mountain Pointe head varsity

girls basketball and varsity football assistant coach, s h a r e d game strategies for the school’s boys basketball and football teams with opponents dating back JUSTIN HAGER to 2017. “Our entire campus is shocked at these findings. It is the responsibility of all adults on a high school campus to act with integrity and

to put students first in all we do,” Mountain Pointe Principal Tomika Banks said in a press release. “Mountain Pointe students, families and staff are heartbroken to learn our trust was violated by someone we cared for and considered a member of our family.” According to a letter Tempe Union Athletic Director Bruce Kipper sent Hines on Friday, Hager shared play calls, formations and at one point a list of players deemed ineligible, giving opposing coaches a “competitive edge.” Kipper told Hines the district compiled evidence from an email account which several Arizona high school coaches communicated back to Hager. He used the alias walterpayton12@yahoo.com for this email account Only a handful of emails were included with

hwatukee has benefitted from more than $5.5 million in parks investment in the last two years and will see a greater police presence, Mayor Kate Gallego said Monday night. Addressing about 100 people at a town hall sponsored by the public policy committee of the Ahwatukee Foothills Chamber of Commerce, Gallego also touted a number of initiatives aimed at creating more jobs in Phoenix. Although the Chamber billed her address as one that would focus on Ahwatukee issues, Gallego devoted most of her 40-minute speech to a broader discussion of citywide issues. Gallego made her first official appearance as mayor in Ahwatukee at last April’s Easter Parade, but the Chamber event marked her first public address to the community since her election in March. She touted $5.5 million in investments in Ahwatukee parks, primarily the new pickle-

securing before Gallego ran for mayor. “If you are among the many, many people