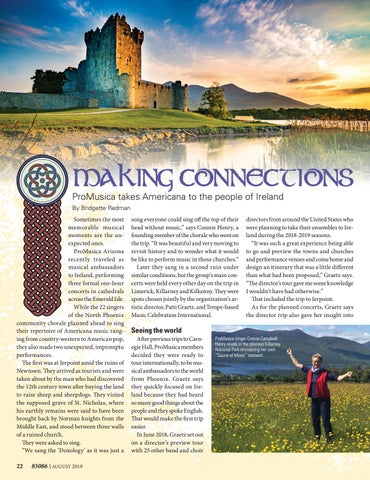 ProMusica takes Americana to the people of Ireland By Bridgette Redman Sometimes the most memorable musical moments are the unexpected ones. ProMusica Arizona recently traveled as musical ambassadors to Ireland, performing three formal one-hour concerts in cathedrals across the Emerald Isle. While the 22 singers of the North Phoenix community chorale planned ahead to sing their repertoire of Americana music ranging from country-western to American pop, they also made two unexpected, impromptu performances. The first was at Jerpoint amid the ruins of Newtown. They arrived as tourists and were taken about by the man who had discovered the 12th century town after buying the land to raise sheep and sheepdogs. They visited the supposed grave of St. Nicholas, where his earthly remains were said to have been brought back by Norman knights from the Middle East, and stood between three walls of a ruined church. They were asked to sing. “We sang the ‘Doxology’ as it was just a

song everyone could sing off the top of their head without music,” says Connie Henry, a founding member of the chorale who went on the trip. “It was beautiful and very moving to revisit history and to wonder what it would be like to perform music in those churches.” Later they sang in a second ruin under similar conditions, but the group’s main concerts were held every other day on the trip in Limerick, Killarney and Kilkenny. They were spots chosen jointly by the organization’s artistic director, Patti Graetz, and Tempe-based Music Celebration International.

directors from around the United States who were planning to take their ensembles to Ireland during the 2018-2019 seasons. “It was such a great experience being able to go and preview the towns and churches and performance venues and come home and design an itinerary that was a little different than what had been proposed,” Graetz says. “The director’s tour gave me some knowledge I wouldn’t have had otherwise.” That included the trip to Jerpoint. As for the planned concerts, Graetz says the director trip also gave her insight into

Seeing the world After previous trips to Carnegie Hall, ProMusica members decided they were ready to tour internationally, to be musical ambassadors to the world from Phoenix. Graetz says they quickly focused on Ireland because they had heard so many good things about the people and they spoke English. That would make the first trip easier. In June 2018, Graetz set out on a director’s preview tour with 25 other band and choir