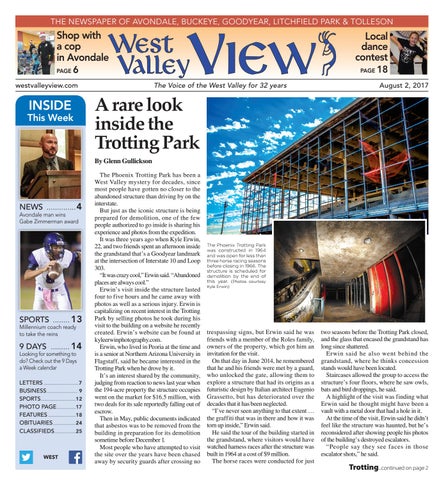 Shop with a cop in Avondale PAGE

The Voice of the West Valley for 32 years

A rare look inside the Trotting Park

The Phoenix Trotting Park has been a West Valley mystery for decades, since most people have gotten no closer to the abandoned structure than driving by on the interstate. But just as the iconic structure is being prepared for demolition, one of the few people authorized to go inside is sharing his experience and photos from the expedition. It was three years ago when Kyle Erwin, 22, and two friends spent an afternoon inside the grandstand that’s a Goodyear landmark at the intersection of Interstate 10 and Loop 303. “It was crazy cool,” Erwin said. “Abandoned places are always cool.” Erwin’s visit inside the structure lasted four to five hours and he came away with photos as well as a serious injury. Erwin is capitalizing on recent interest in the Trotting Park by selling photos he took during his visit to the building on a website he recently created. Erwin’s website can be found at kyleerwinphotography.com. Erwin, who lived in Peoria at the time and is a senior at Northern Arizona University in Flagstaff, said he became interested in the Trotting Park when he drove by it. It’s an interest shared by the community, judging from reaction to news last year when the 194-acre property the structure occupies went on the market for $16.5 million, with two deals for its sale reportedly falling out of escrow. Then in May, public documents indicated that asbestos was to be removed from the building in preparation for its demolition sometime before December 1. Most people who have attempted to visit the site over the years have been chased away by security guards after crossing no

The Phoenix Trotting Park was constructed in 1964 and was open for less than three horse racing seasons before closing in 1966. The structure is scheduled for demolition by the end of this year. (Photos courtesy Kyle Erwin)

trespassing signs, but Erwin said he was friends with a member of the Roles family, owners of the property, which got him an invitation for the visit. On that day in June 2014, he remembered that he and his friends were met by a guard, who unlocked the gate, allowing them to explore a structure that had its origins as a futuristic design by Italian architect Eugenio Grassetto, but has deteriorated over the decades that it has been neglected. “I’ve never seen anything to that extent … the graffiti that was in there and how it was torn up inside,” Erwin said. He said the tour of the building started in the grandstand, where visitors would have watched harness races after the structure was built in 1964 at a cost of $9 million. The horse races were conducted for just

two seasons before the Trotting Park closed, and the glass that encased the grandstand has long since shattered. Erwin said he also went behind the grandstand, where he thinks concession stands would have been located. Staircases allowed the group to access the structure’s four floors, where he saw owls, bats and bird droppings, he said. A highlight of the visit was finding what Erwin said he thought might have been a vault with a metal door that had a hole in it. At the time of the visit, Erwin said he didn’t feel like the structure was haunted, but he’s reconsidered after showing people his photos of the building’s destroyed escalators. “People say they see faces in those escalator shots,” he said.